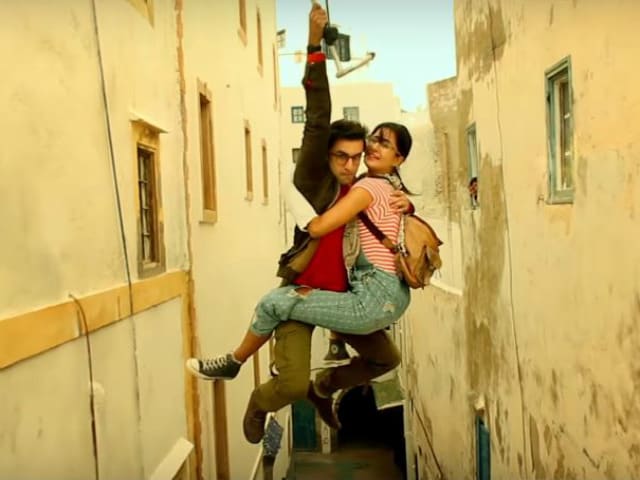 The first trailer of Ranbir Kapoor's much-delayed and now upcoming movie Jagga Jasoos released on Tuesday morning and has a bit of everything. It looks a bit like Madagascar meets The Lion King meets Tintin - it's set in the African savannah, as you might have guessed from the poster that released a day ago. The visuals are spectacular and while we aren't sure what's really going on, it looks super cute. Don't blink, because then you might miss some of the action that takes place at thrilling speed. Ranbir Kapoor sets the mood as he appears on screen in his signature be-spectacled Jagga Jasoos persona, singing a capella. The trailer moves on to adrenaline pumping scenes - car chase on dirt roads, parachutes accompanying an aeroplane, and a bewildering menagerie - there's a bit of everything.
Now, enter Katrina Kaif, looking cute as a button. How she becomes an accomplice of or friends with Ranbir's character is not shown - like we said, it's a bit hard to tell what's happening - but what is made clear is that Ranbir is absolutely smitten by her. Katrina Kaif turns around and Ranbir gets jelly legs. The only line of dialogue is prompted by her at the end of the trailer. In some interesting bits, Katrina and Ranbir recreate scenes from his film Barfi! but with goof-ups. Ranbir attempts to wipe clean Katrina's shoes, just like his character Barfi did for Priyanka Chopra's Jhilmil. Jagaa Jasoos is helmed by Anurag Basu, who also directed Barfi and stars Ranbir as a teenaged detective while Katrina features as his sidekick.
Katrina and Ranbir's excellent African adventures features enough animals to populate a zoo. The first poster of Jagga Jasoos caused somewhat of a meltdown on the Internet when it was unveiled yesterday - it featured Katrina, Ranbir and an ostrich. Umm... ostrich? The trailer solves the mystery.
Video: Watch the trailer of Ranbir Kapoor's Jagga Jasoos here: