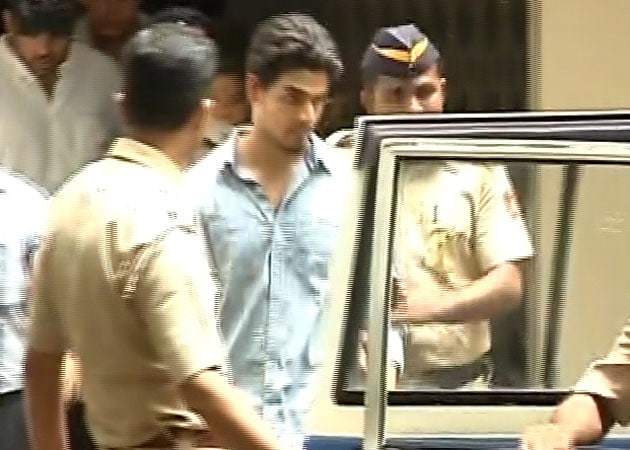 Suraj Pancholi, the ex-boyfriend of actor Jiah Khan who committed suicide last week, will remain in police custody till Thursday, a Mumbai court ruled on Tuesday (June 11, 2013). (Read: In letter, Jiah wrote: If I stay here, I will crave you)
Mr Pancholi, who is 21, was arrested by the Mumbai police on Monday and charged with abetting the suicide of Ms Khan, who was 25, after a letter was found in her room by her family.
The letter is not addressed to anyone but appears to refer to a romantic relationship. "If you're reading this I might have already left or about to leave. I am broken inside," she wrote.
Mr Pancholi, an aspiring actor, is the son of Bollywood stars Aditya Pancholi and Zarina Wahab. He reportedly dated Ms Khan for a year before the relationship ended. "There is a suicide note, there is a statement of (Khan's) mother and some circumstantial evidence of triggering," said Additional Police Commissioner Vishwas Nangre-Patil to news agency AFP.
In court, Mr Pancholi's lawyer argued that the letter found after Ms Khan's death does not name his client.
Ms Khan's mother, Rabiya Amin Khan, alleges that the six-page letter written by the young actor proves that she was driven to suicide by a messy love affair. "The letter does not have a name, so who it is addressed to is something you can only ask Jiah. But because of the incidents in the past and what she told me, all of these things point out to Suraj Pancholi," she said to reporters on Monday (June 10, 2013).
Ms Khan, born in New York before moving to London and then Mumbai, made her Bollywood debut in 2007 with the controversial film Nishabd, playing a teenager in love with her best friend's much older father, played by Amitabh Bachchan.
(Also read: Once Bollywood's brightest young thing)
She went on to star alongside actor Aamir Khan in the blockbuster Ghajini. A doctor testified in court that Jiah had been depressed. Suraj's lawyer emphasized on the fact that no suicide note had been found and the letter written by Jiah that was handed over to the police by the family did not name Suraj. (Also read: Actor Jiah Khan commits suicide in Mumbai home)