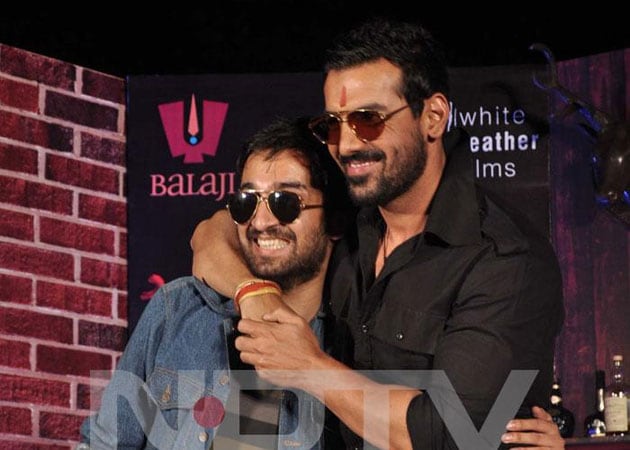 John Abraham will be seen together with Shakti Kapoor?s son Siddhant in Shootout At Wadala.

John Abraham, who plays gangster Manya Surve in soon to released Shootout At Wadala, marvels at newcomer Siddhant Kapoor's performance in the film and says he could be the next star.

John Abraham, who plays gangster Manya Surve in soon to released Shootout At Wadala, marvels at newcomer Siddhant Kapoor's performance in the film and says he could be the next star.
Son of Shibangi and actor Shakti Kapoor, Siddhant is making his acting debut with the gangster drama based on the Mumbai police's first official encounter, in which Manya Surve was shot down.
Praising Siddhant, who plays a sharp shooter from Manya's gang in the film, John said: "Siddhant Kapoor is another future superstar of tomorrow. He is absolutely brilliant."
"He (Siddhant) plays Gyanchod in the film. His performance (in the film) is outstanding. After the film, mark my words, we will have another star," added the 41-year-old.
He was speaking at the launch of the song Ala re Manya from Shootout At Wadala. The youngster didn't miss the opportunity to praised John for supporting him throughout.
"John had gone out of the way to help me and give me so much of the confidence," Siddhant, whose sister Shraddha is already in the films and will be seen in much-talked about forthcoming musical romantic saga Aashiqui 2.
Initially, Siddhant started his career as a disc jockey, later he worked with filmmaker Priyadarshan as an assistant director. And now he is all set to showcase his acting skills in Shootout At Wadala.
Directed by Sanjay Gupta, the film also features actors Anil Kapoor, Manoj Bajpayee, Sonu Sood, Tusshar Kapoor and Kangana Ranaut among others.
Siddhant is thankful to Gupta too and said: "The film is very close to me. Sanjay Gupta sir have given me a very big opportunity to work with such big actors like John Abraham, Anil Kapoor, Manoj Bajpayee."
He feels by sharing the same platform with the experienced actors one "learns so much" and gives credit to them for "half of my performance".
Shootout At Wadala is slated for May 3 release.