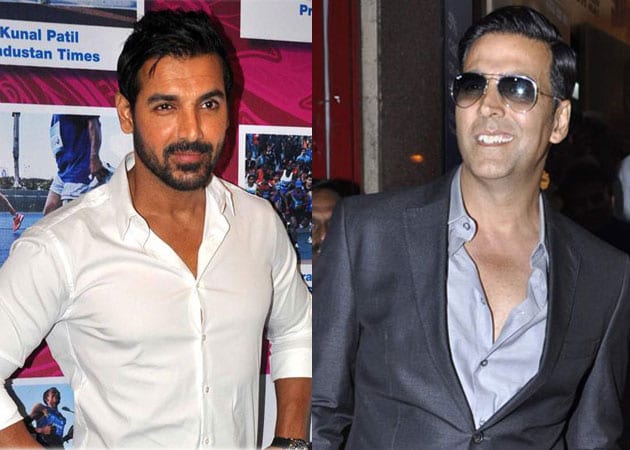 John Abraham has replaced Akshay Kumar in Welcome Back, a sequel to Welcome, and says that the Bollywood Khiladi is "happiest" for him.

John Abraham has replaced Akshay Kumar in Welcome Back, a sequel to Welcome, and says that the Bollywood Khiladi is "happiest" for him.
In the 2007 hit comedy Welcome, Akshay played the main lead.
"Akshay is like my elder brother. Whatever I do, I always have a lot of discussions, especially with him. Akshay is happiest for me when I told him that I am doing Welcome Back. He said it's a very good film and you should do it," the 40-year-old said on the sets of TV show Bade Acche Lagte Hain where he was promoting his film Shootout at Wadala.
"It's an outstanding script, kids will love it and I am looking forward to doing it," he added.
John has reportedly charged Rs 15 crore for Welcome Back, but did not confirm the news.
"As far as money is concerned, I don't talk about money at all as I think it's not as important. I charge because I think I deserve it. But I give it to charity because I think that's more important," John said.
John's next film is much-talked about real life-based crime thriller Shootout At Wadala, in which he is playing gangster Manya Surve who was gunned down in the Mumbai police's first official encounter. A host of actors like Anil Kapoor, Tusshar Kapoor, Manoj Bajpayee and Mahesh Manjrekar feature in it.
But John misses Kangana Ranaut during the promotions of Shootout at Wadala. The actress plays his love interest in the film.
"Kangana will join us for the promotions, but right now she is shooting for some film. I miss Kangana a lot and people may not know that Manya Surve's romantic track is one of the most beautiful romantic tracks, a tragic love story," John said.
"Kangana has done an outstanding job. We all are missing her and we hope to see her soon," added John.
Directed by Sanjay Gupta, Shootout at Wadala hits theatres on May 3.