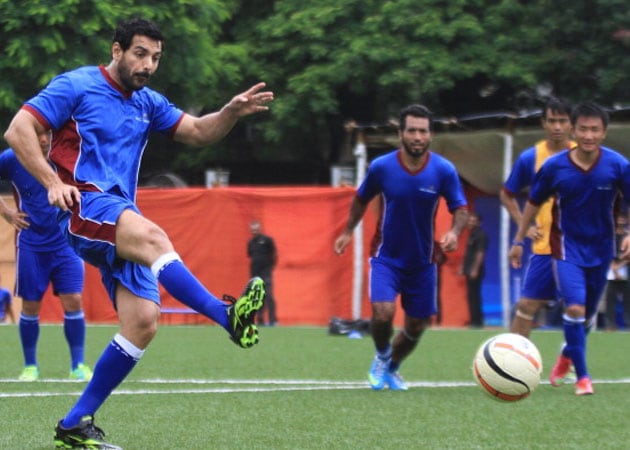 John is extremely passionate about football

John Abraham is currently living and loving the 2014 FIFA World Cup fever, but the actor-producer, who is also a co-owner of Indian Super League (ISL) Guwahati franchise North East United Football Club, may just rope in some real football players for his movie production 1911. (Also Read: Salman Khan and John Abraham to Clash Again)
The film, he says, is a "truly inspirational" story of late Indian footballer Sibdas Bhaduri, who captained Mohun Bagan in the historic 1911 IFA Shield final when they defeated the East Yorkshire Regiment to become the maiden Asian team to emerge victorious in the competition.
John, a football fan himself, is upbeat about the project, of which he is both producer and actor. But how about getting some real players out of the IPL-style ISL football league to kick the ball as well?
"Great idea! Yeah, I think it's great, but unfortunately the league starts now, and the shooting of the film starts later. Maybe the people who are playing in the league, we can ask them if they want to shoot for the film (later)," John told IANS over the phone from Mumbai.
While that could be a plan John seemed to keen to work on, he's quite confident that 1911, his project with the maverick Shoojit Sircar of Vicky Donor and Madras Cafe fame, will draw positive feedback.
The cameras will start rolling in early 2015 for the project.
"It's a truly inspirational football story or rather a sports story. We are very proud to make this film. If Vicky Donor and Madras Cafe are any indications to go by, we'll give the audience an extremely good film," John said.
He says the movie will turn out to be as "different" as his past two productions, both of which pocketed National Film Awards in different categories.
"When people asked me about Vicky Donor and Madras Cafe, I always said, 'They are different films', but people never really understood what it meant until they saw the films. I say 1911 will be the first Indian international film.
"I expect it to do good business not just in India, but if presented well by a forward thinking studio overseas, then we'd get huge results from this film overseas. It's got that flavour, very international and yet very Indian," he added about the project.
John earlier told IANS that he would have loved to play football for India, but perhaps he's living his passion by playing a footballer on the big screen. He had earlier played one in the 2007 film Dhan Dhana Dhan Goal.
Produced by the actor's banner JA Entertainment in collaboration with Sunir Kheterpal's Azure Entertainment, 1911 happened on Shoojit Sircar's insistence.
"Shoojit said, 'John, let's do this together. You're the only guy (in Bollywood) who understands football and really knows how to play football.' I felt good about it, and I think it's a wonderful script.
"Shoojit and I have a great working relationship," said the 41-year-old, who, for now is busy juggling between his Rocky Handsome production as well as as his duties as the 2014 FIFA World Cup brand ambassador in India, as appointed by sports and entertainment channel Sony SIX.