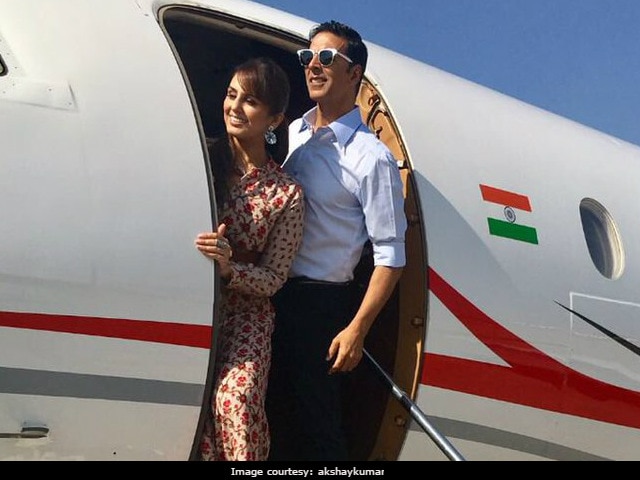 Actors Akshay Kumar and Huma Qureshi, co-stars of upcoming courtroom drama Jolly LLB 2, were in Ahmedabad on Wednesday to promote their film. The 49-year-old actor plays the protagonist, a lawyer named Jagdish Mishra, in the Subhash Kapoor-directed film. Actress Huma Qureshi is cast as his wife in Jolly LLB 2, which is a sequel to Arshad Warsi's 2013 film Jolly LLB. The Khiladi actor and the 30-year-old actress interacted with the media, had a lot of fun, and thanked fans and followers in Ahmedabad before leaving the city. Akshay's tweet was also on behalf of Huma Qureshi: "A big thank you from Jolly and Pushpa for the love Ahmedabad. See you at the movies on February 10." Huma also tweeted: "Thanks Ahmedabad for all the love. Jolly and Pushpa had a blast."
This is how Akshay and Huma wrapped their Ahmedabad trip:


A big thank you from Jolly and Pushpa for the love Ahmedabad See you at the movies #JollyLLB2OnFeb10pic.twitter.com/orgC9WmTyb

More pictures of the jolly good duo have been shared on social media. Huma was pretty in a printed maxi-dress while Akshay kept in simple in shirt and trousers.

In the sequel to Jolly LLB, Akshay Kumar replaced Arshad Warsi, whose film was well-received when released. In a recent interview with news agency PTI, Arshad said that he's happy for Akshay and that his team has done a "great job." "I am very happy for Akshay. I am sure he and the team have done a great job. He and I keep talking about it. In fact, I am even promoting the film in my own way. I am yet to watch it but I am really excited about its release," PTI quoted Arshad as saying.
Earlier this week, Akshay also addressed the Munna Bhai actor in an interview to PTI and said: "I am very grateful to Arshad to show me the way of doing a film like this. He made the way for me; he made things easy for me. He made this film very big and I hope that Jolly LLB 2 also turns out to be a good film."
Actor Saurabh Shukla will reprise his role of a judge in Jolly LLB 2, which is scheduled for February 10.
Akshay Kumar's upcoming films include Rajnikanth's 2.0 and Toilet: Ek Prem Katha. Akshay will also star in Pad Man, which is Twinkle Khanna's first production under her new banner, Mrs Funnybones Movies. Huma Qureshi was last seen in Malayalam film White.