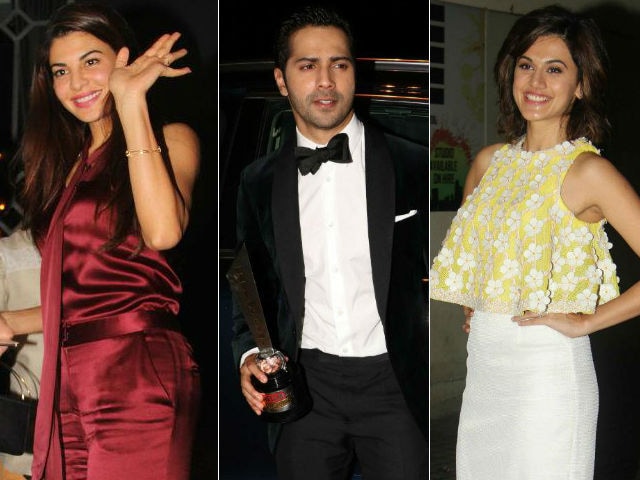 Varun Dhawan's Judwaa 2 heroines - Jacqueline Fernandez and Taapsee Pannu - can 'barely see eye to eye' and share 'cold vibes' on the film's sets, reports mid-day. Jacqueline and Taapsee reportedly requested for non-overlapping schedules and when they did bump into each other (once when Taapsee returned to shoot for a small portion) they only 'exchanged pleasantries' and otherwise avoided each other, a source told mid-day. "The actresses have parallel tracks and the script demands that they work together for only a few scenes in the climax, shooting for which will be completed over a day or two. In films with ensemble casts, the actors often catch up on set, whether they are shooting together or not. That clearly isn't happening with these ladies," the source said.
"They can barely see eye to eye. Taapsee had shot for 25 days, and Jacqueline, 15, in London. As per their request, their schedules were chalked out in such a way that they didn't overlap. But, Taapsee did bump into Jacqueline when she returned for two days of patch work," the source added.
Varun Dhawan, who is on excellent terms with both Jacqueline and Taapsee, is reportedly not interested in helping them get along. "Varun shares a great rapport with both and wouldn't want to meddle in their matters. They have never had a tiff, but the dislike was evident," mid-day quoted a source as saying.
Judwaa 2, directed by David Dhawan, is a remake of Salman Khan's 1997 hit film, also directed by David Dhawan. Salman, 51, reportedly has a cameo towards the climax.