Juhi Chawla: Was Apprehensive About Working With Madhuri in Gulaab Gang 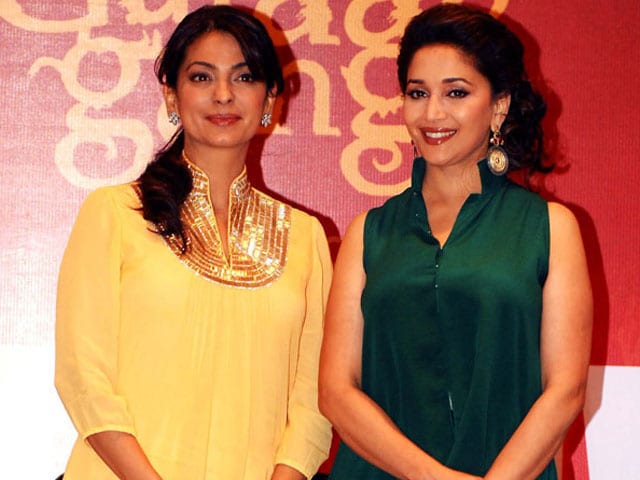 Juhi and Madhuri photographed at an event in Mumbai.

Before we started shooting for Gulaab Gang, Soumik Sen called Madhuri and me to his office. We sat and chatted for a couple of hours and for me, that really broke the ice

Breaking away from the bubbly and positive image which she has in Bollywood, Juhi Chawla played the grey shaded character of Sumitra Devi in 2014 film Gulaab Gang. The actress said that she would "love" to play more negative roles if they are "fantastic and edgier".
"I would love to do more negative roles. I am open to doing something unusual again but I am spoiled after the experience of Gulaab Gang. The next negative character has to be something fantastic and edgier than Sumitra Devi," Juhi said here.
During her career, the 47-year-old mostly featured in romantic or comic roles in films like Qayamat Se Qayamat Tak, Bol Radha Bol, Hum Hain Rahi Pyaar Ke, Darr, Ishq, Son of Sardaar and Bhootnath. (Also Read: Juhi Chawla: Never Imagined I Would Be Around For So Long)
"In 20 years of my career, I was only known for my bubbly, positive, sweet roles. I was apprehensive to play this kind of a character who was completely evil from first to last scene. So, I refused the role at first. But I liked the spunk in Gulaab Gang," Juhi added.
In Gulaab Gang, the crime drama which released in March last year, she also got a chance to feature with her contemporary Madhuri Dixit.
"Initially, I was quite apprehensive about how would we work together. But before we started shooting, Soumik Sen called Madhuri and me to his office. We sat and chatted for a couple of hours and for me, that really broke the ice. I told her that it's really a good script and with us cast together for the first time, this film should go places," Juhi said.
The actress, who believes in "gender equality and in women empowerment", is content with the way her career shaped up in Indian films.
"When I look back at my career and my life and how much I have learnt, I feel blessed with what I have. I have stopped fighting with myself. There is amazing power in getting to know your inner self and learning how to use it and not fight with the world. If you know what makes you happy, your personality, interests and capabilities, just use them and everything else flows beautifully," she said.
Juhi will next be seen in Chalk n Duster along with Shabana Azmi, Zarina Wahab and Divya Dutta.