Juhi Chawla was inspired by politicians for Gulab Gang 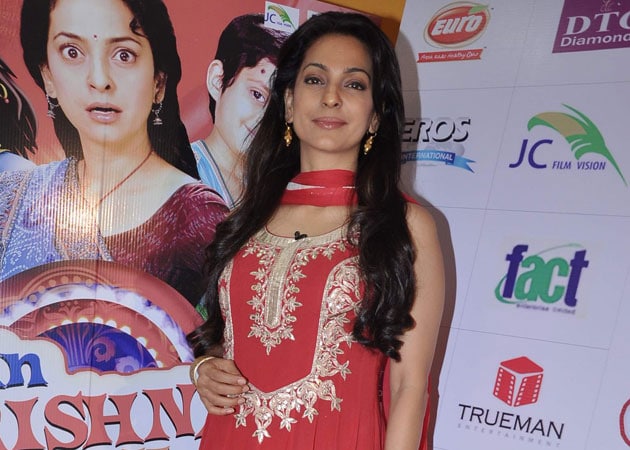 Juhi Chawla imbibed the mannerism and dressing style of leading women politicians like Sonia Gandhi, Sushma Swaraj and Mamata Banerjee for her role in the upcoming film Gulab Gang.

Actress Juhi Chawla imbibed the mannerism and dressing style of leading women politicians like Sonia Gandhi, Sushma Swaraj and Mamata Banerjee for her role in the upcoming film Gulab Gang. The 45-year-old former Miss India, known for her bubbly personality, admits that it was a challenge to get into the skin of a politician's character in the film, which also stars Madhuri Dixit.
"It is my second negative role after Arjun Pandit. It's a slightly tough role for me because in real life I am completely opposite. I took inspiration from politicians like Sushmaji, Soniaji and Mamataji for this role. I have followed them closely and tried to learn their mannerism because it is a very different character," Juhi told PTI in an interview. 'Gulaab Gang', which just finished shooting, is directed by debutante Soumik Sen and produced by filmmaker Anubhav Sinha. The release date of the film is yet to be decided. The film is about a group of women activists fighting social injustice.
Once considered competitors, Juhi and Madhuri will be sharing screen space for the first time and the actress said working with Madhuri was fun.
"Madhuri is a fine actress and secure about what she is doing. She is warm and friendly and working with her was like a breeze. Before starting the shooting for the film we met at our director's office and interacted with each other. That's how we broke the ice," Juhi said.
Starting her career with commercial films like Qayamat Se Qayamat Tak, Raju Ban Gaya Gentleman among others, Juhi says she has come to love her roles in small-budget films like My Brother Nikhil and I Am more than her commercial hits. "It has been wonderful journey of 27 years. I never thought that I would survive for so long. I have done many films and I am quite happy and proud about all my films but my career took a gradual turn when I did films like I Am and My Brother Nikhil.
"Initially, I was ashamed of talking about them because they were small-budget films but I realised later that being a part of these films was more fulfilling as an artiste." Asked about her criteria for selecting a film, Juhi said, "I never consider whether I am playing a lead role or not. I would rather go for meaty roles than for lead characters."