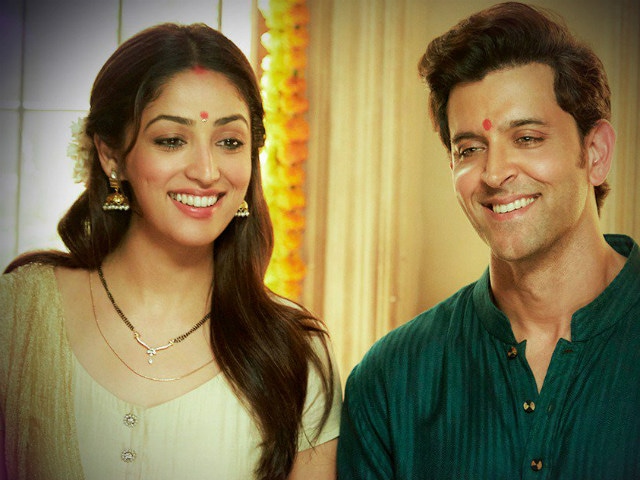 Actor Hrithik Roshan screened his new film Kaabil for a few celebrity colleagues in Mumbai on Monday evening. Among them were celeb couple Akshay Kumar and Twinkle Khanna. Kaabil releases on Wednesday alongside Shah Rukh Khan's Raees. Akshay, apart from being Hrithik's neighbour, was the actor Hrithik clashed with at the box office last year - their films Rustom and Mohenjo Daro released together in August. Kaabil, in which Hrithik Roshan plays a visually impaired man, is being shown to Bollywood in a series of screenings. Akshay and Twinkle both began their week watching the film and tweeted in praise of its star.
Akshay described Hrithik's performance as 'sincere' and the film as 'sensitive.' Twinkle tweeted that he was 'wonderful' as always.


Just watched #Kaabil, @iHrithik's sincere effort is commendable,he's evidently given it his all. A sensitive film with captivating storyline

Just saw Kaabil and @iHrithik is absolutely wonderful in this engrossing movie but then isn't he always :) #Kaabil

The showdown with SRK'S Raees has led to speculation about the potential box office performance of the films, with the consensus that if there is a loser, it will be Kaabil. However, this tweet from trade analyst Taran Adarsh who was also at the screening, seems to have raised hopes among Hrithik's fans.


The most hearted performance in history of Indian cinema @iHrithik! Kaabil will melt u! kudos 2 d team @yamigautam@_SanjayGuptapic.twitter.com/TICcjCm9QJ

Eternal sunshine of the spotless mind..so so so incredibly proud of you @iHrithikpic.twitter.com/jwMuaos2M3

Guddu/Sanjay/Duggu/Yami/Sudeep/Resul-"Kabil" Winner all the way. Thrilling,chilling,entertaining. Congratulations all concerned. Loved it!

@RakeshRoshan_N congratulations for Kaabil. @iHrithik will sweep all the awards this year.Will watch it again for sure

Kaabil, directed by Sanjay Gupta, co-stars Yami Gautam and actor brothers Ronit and Rohit Roy. The film, which was to release at 6 pm on Wednesday, has revised it's first day first show time to open in the morning with SRK'S Raees - deliberately going up against the film after first having backed away by changing its release date from January 26 to 25. Raees followed suit, eventually prompting the change in Kaabil's time.
Hrithik Roshan, ever gracious, has maintained that the competition won't affect his friendship with Shah Rukh Khan, telling NDTV that they have good 'communication.' When Rustom and Mohenjo Daro were to release together, he tweeted nice things about Akshay Kumar's film and the compliment was returned by both Akshay and Twinkle.
Shah Rukh Khan, meanwhile, is on a train from Mumbai to Delhi, promoting Raees at stations on the way.