Kai Po Che, ABCD - AnyBody Can Dance fair well in first quarter of 2013 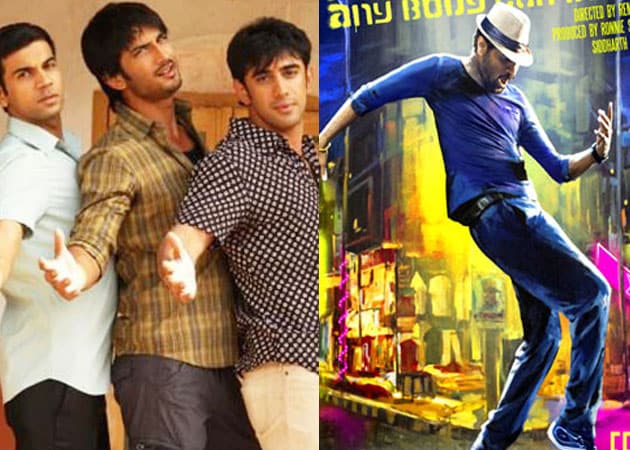 "Barely any films have struck the chord like ABCD and Kai Po Che have," says trade analyst Komal Nahata.

A heady mix of differential, comedy, thriller and dramas hit the Bollywood box office and entertained the audiences in the first quarter of 2013. It has however been quite a dry spell on the business front, with just one film surpassing the Rs 100-crore mark.

A heady mix of differential, comedy, thriller and dramas hit the Bollywood box office and entertained the audiences in the first quarter of 2013. It has however been quite a dry spell on the business front, with just one film surpassing the Rs 100-crore mark and the total collections amounting to about Rs 450 crore, industry insiders say.
Of around 40 Hindi releases so far, the box office has managed to garner Rs 440 crore to Rs 450 crore, which is lower than in the first quarter of 2012, said Rajesh Thadani of Multimedia Combines.
"The year 2013 has not been a great year so far for the film industry. It's just an average year. Hardly any films have done well. If we compare the collections to last year's, then there is a drastic fall this year," Thadani told IANS.
Race 2, a multi-starrer sequel to 2008 film Race, was the single film that managed to break through the highly rated Rs 100-crore club. But the fact that a Rs 60-crore film crossed the Rs 100-crore mark in two weeks after its release was no big deal, according to trade analyst Komal Nahta.
"It was quite an expensive film. The film didn't really garner any profit as such for the industry," said Nahata.
Thadani, too, said: " Race 2 must have just covered the making charges, but no one made money or garnered profit out of this film."
In January, Matru Ki Bijlee Ka Mandola was one of the most awaited films, but even with its critically lauded performances, the movie didn't create the expected excitement at the ticket counters after the first week.
February saw films like Vishwaroop, Special 26, ABCD: AnyBody Can Dance, Murder 3, Kai Po Che and Zilla Ghaziabad in theatres. Amongst them, Akshay Kumar-starrer Special 26, Remo D'Souza's 3D dance-based film ABCD: AnyBody Can Dance and Abhishek Kapoor-directed Kai Po Che stood out.
Distributor Sanjay Ghai from Mukta Arts said: "Only two films did fairly well - Kai Po Che and ABCD. Kai Po Che collected approximately over Rs 50 crore, and that is outstanding as the film fairly had new faces.
"Even ABCD did exceptionally well and collected approximately Rs 40 crore. Collections of Special 26 were good, but unfortunately distributors didn't earn any profit from the film. It collected approximately Rs 70 crore," he added.
Overall, the first quarter has been disapponinting, said Nahata, adding: "If we compare the collections to 2012, then it's all the more sad. Barely any films have struck the chord like ABCD and Kai Po Che have."
Among the latest releases of March, Jolly LLB and Saheb Biwi Aur Gangster Returns are said to have garnered decent business.
"Saheb Biwi Aur Gangster Returns has done decent business. The film managed to collect around Rs 20 crores," Thadani said about the movie, which is said to have been made on a budget of just Rs 7 crore.
Besides, the release of the much-publicised Himmatwala, a remake of the 1983 eponymous film, is still awaited towards the end of March. With Ajay Devgn and southern actress Tamannah Bhatia's sizzling chemistry and the overall retro look, teamed with power-packed action, one hopes the movie alleviates the depression in box office's first quarter graph.
Despite the fairly dry spell, trade gurus are looking ahead for a brighter second quarter with big-ticket films like Chashme Buddoor remake, Ek Thi Daayan, Shootout at Wadala, Zanjeer remake, Yeh Jawaani Hai Deewani, Yamla Pagla Deewana 2 and Ghanchakkar lined up for release.
"This is just the beginning; all we can say is we can hope for the best. The Khans' films are yet to come, and it also depends on the content of the films that are coming. I am hoping the upcoming good films will change the fate," said Nahata.
Sanjay Ghai said: "In 2012, in the beginning itself, the box office had some films like Kahaani, Vicky Donor and Agneepath, but this year with such sad start, we still hope for the best with films like Himmatwala, Dhoom 3 and Chennai Express."