Viral: Karan Johar Writes Of 'Fallout' With Kajol, His Friend Of 25 Years

Karan Johar, Kajol fallout: Pictures believed to be of pages from Karan Johar's autobiography have been shared on social media 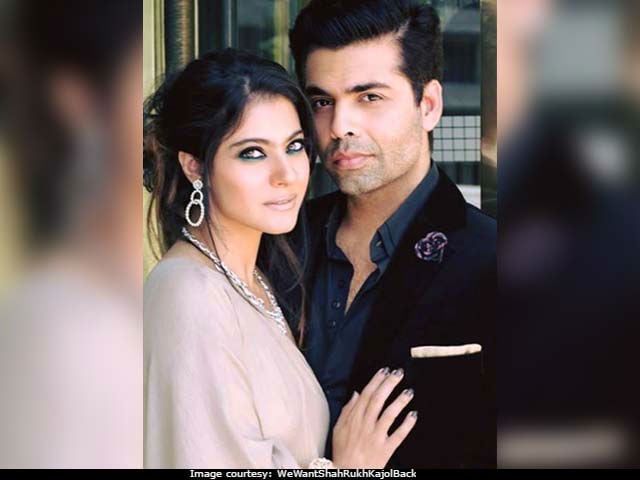 Once, actress Kajol was considered filmmaker Karan Johar's lucky charm. She starred in his earliest films Kuch Kuch Hota Hai (1998) and Kabhi Khushi Kabhie Gham (2001), and then again in his 2010 offering My Name Is Khan. They have been friends and collaborators for 25 years but it's been recently made clear that the director and his former muse are no longer partners. In fact, relations are positively icy now. Karan Johar writes about the end of his friendship with Kajol in his new autobiography, An Unsuitable Boy. What appears to be pictures of pages from the book are going viral on social media. "I don't have a relationship with Kajol anymore. We have had a fallout," he writes.
This admission of a break-down in one of Bollywood's most storied partnerships was preceded by Kajol's husband Ajay Devgn telling news agency PTI last October that their "equation is not as warm as it was." In the purported pages of his book, Karan Johar places the blame squarely on Ajay. "The problem was actually never between her and me. It was between her husband and me, something which only she knows about, he knows about and I know about. But did feel that she needed to apologise for something she didn't do. I felt that she's not going to acknowledge 25 years of friendship, if she wants to support her husband, then that's her prerogative," he writes.
This emotional excerpt has a backstory that requires a rewind to last year when Ajay Devgn's Shivaay and Karan Johar's Ae Dil Hai Mushkil clashed at the box-office on Diwali. Ahead of the films' release, Ajay posted audio of a phone conversation between self-styled critic Kamaal R Khan and Shivaayco-producer Kumar Mangat. The clip records KRK claiming that Karan paid him Rs 25 lakhs to tweet in favour of his film. KRK later alleged that he had only said what he did to end the exchange with Mr Mangat. KJo hadn't paid him, he said, but Mr Mangat offered to. Soon after Ajay's tweet, Kajol wrote on her account: "Shocked!"
Karan Johar's autobiography says that Kajol's reaction in October was like the final nail in the coffin for him. "That tweet validated the insanity that she could believe I could bribe someone. I felt that's it. It's over. And she can never come back to my life. I don't think she wants to either. I never want to have anything to do with them as a unit. She was the one who mattered to me and now it's over," he wrote.
Karan Johar also added: "I wouldn't like to give her a piece of myself to her at all because she's killed every bit of emotion I had for her for 25 years. I don't think she deserves me. I feel nothing for her anymore."
Read the purported excerpts from Karan Johar's book here:


Karan johar on his fallout with Kajol. pic.twitter.com/P4Y4sNJOtd

Ae Dil Hai Mushkil remains Karan Johar's last directed film while he co-produces OK Jaanu, which released today. Karan also produces Badrinath Ki Dulhania and Dragon, which are lined up for later this year. Kajol was last seen in Rohit Shetty's Dilwale and is busy with her part in Dhanush's Velaiilla Pattadhari 2.