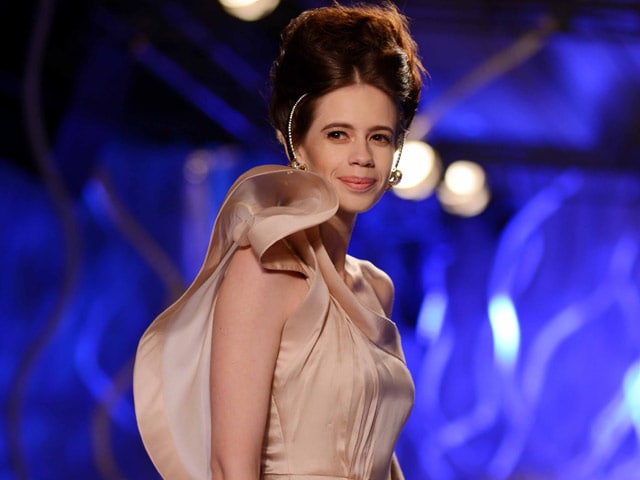 "I think Kangana is very stylish. And Neha Dhupia also has a style sense," said Kalki

Margarita, With a Straw star Kalki Koechlin has listed Kangana Ranaut and Neha Dhupia the most stylish actresses of the Hindi film industry.
Kalki, 31, who turned showstopper for designer Gaurav Gupta at the ongoing Amazon India Couture Week, was all praise for her contemporaries.
"I think Kangana is very stylish. And Neha Dhupia also has a style sense. I find their style great," Kalki told reporters here.
Kalki looked radiant in a pink off-shoulder gown as she walked the ramp. With her hair tied in a bun and gold metal pieces adorning her ears, the Dev D actress glowed in her understated ensemble.
"I feel like a princess in this outfit. It is enchanting. It is a gorgeous dress. It is very different from what Gaurav usually makes. It has a fairytale elfin vibe to it. He is very good at using his imagination," said the actress.

Gaurav said his collection, titled 'Silt and Cipher', was closest to his personal style.
"This show is called 'Silt and Cipher'. Silt is sand and cipher means zero. It started with thoughts of enchanted forests, my fantasy world where I live in. Kalki is my fairy. It is an attempt to make the collection and couture line sophisticated. I was being much more true to myself this time," Gaurav said.
The collection saw the designer experimenting with cinch waist, a departure from his almost mermaid-like look.
The models walked the ramp in gowns, saree lehangas, saree gowns and skirts. Structure and drape were juxtaposed throughout in oil blue, glare silver, withered peach, just nude and tipsy gold.
"We worked a lot on this look, twice or thrice to get it right. A lot of hardwork has gone into getting the look. Using sprays, sculpting of the hair and the metal pieces, everything came together. It really adds to the other worldly charm," said the designer.
Gaurav described Kalki as his perfect muse and said her multi-faceted nature is attractive.
"Kalki was in my first couture campaign last year and in 2013 as well. She is my perfect muse. She is playful, mystical and multi-faceted. That's what enchants me," he said.