"We have communicated the date (April 30) to the cyber crime on Saturday last, as that is the earliest when all three of us - Kangana, her sister Rangoli and I will be available - for recording of the statement," Kangana Ranaut's lawyer Rizwan Siddiquee said on Tuesday 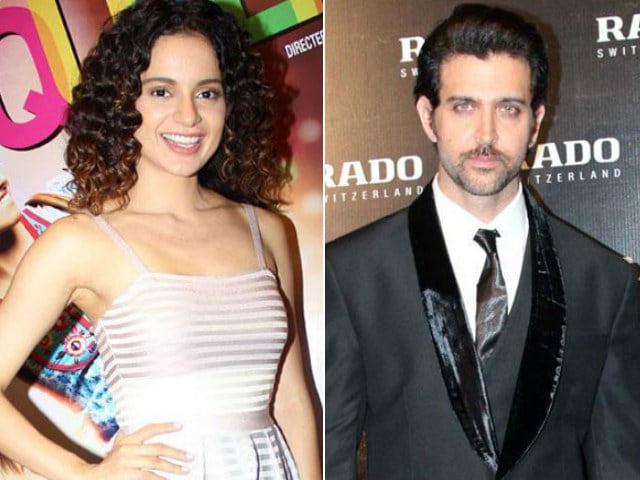 File photos of Kangana and Hrithik.

In the feud between actors and rumoured exes Kangana Ranaut and Hrithik Roshan, the scene has shifted to the Mumbai home of Ms Ranaut. The Queen star has now set a date for a meeting with the police and will give them a statement related to Mr Roshan's complaint of an imposter who allegedly emailed Ms Ranaut pretending to be him. The cyber crime police will visit Ms Ranaut at home at the end of this month, said her lawyer.
"We have communicated the date (April 30) to the cyber crime on Saturday last, as that is the earliest when all three of us - Kangana, her sister Rangoli and I will be available - for recording of the statement," Kangana Ranaut's lawyer Rizwan Siddiquee said on Tuesday.
Mr Siddiquee also dismissed reports that Ms Ranaut was 'summoned' by the police, saying that she has been asked for a statement as a witness in the case.
Hrithik Roshan's reps have accused Ms Ranaut of stalling the investigation. Some weeks ago, Mr Roshan filed a First Information Report or FIR with the cyber crime division against an 'imposter,' claiming that an email ID with his name had been used to communicate with Ms Ranaut three-odd years ago. Ms Ranaut's team insists that the correspondent had been the Krrish actor himself and that he was using a different email ID because he was still married to then-wife Sussanne. Hrithik Roshan and Sussanne Khan divorced in 2014. (Also Read: Kangana Ranaut Has Stalled Investigation, Says Team Hrithik)
Mr Roshan and Ms Ranaut met while filming 2010 film Kites and reportedly dated while making Krrish 3 (2013). Since January this year, the actors have exchanged legal notices and recriminations after Ms Ranaut appeared to refer to Mr Roshan as a 'silly ex' in an interview.
Hrithik Roshan, 42, has demanded that Kangana Ranaut apologise publicly and make it clear that he is not the 'ex' she referred to. Ms Ranaut, 28, has accused Mr Roshan of 'slut-shaming' her by circulating private mails and photos.
Both actors are currently making highly-anticipated films - Hrithik Roshan is starring in Ashutosh Gowariker's Mohenjo Daro, Kangana Ranaut is filming the Vishal Bhardwaj-directed Rangoon.