Kangana, Priyanka Queen it at Party With Filmy Friends 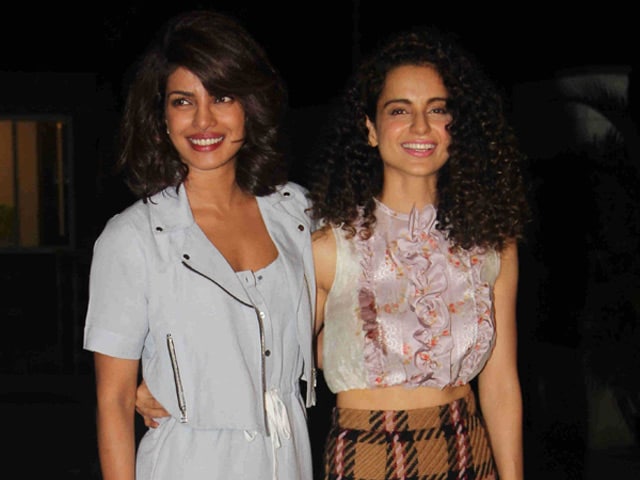 Priyanka and Kangana at their party in Mumbai.

This might be the start of a beautiful new friendship. Actresses Kangana Ranaut and Priyanka Chopra celebrated their recent National Award success at a joint party in Mumbai on May 4.
Kangana, who won the Best Actress National Award for her performance in Queen, celebrated her big win a checked skirt and a cropped top. Priyanka, whose film Mary Kom bagged the award for Best Popular Film Providing Wholesome Entertainment, wore a jumpsuit topped with a matching moto jacket. (In pics - Party Pals: Mary Kom and Queen Celebrate With Shraddha, Vidya, Aamir)
At the party, the actresses giggled together like schoolgirls, something that should surprise nobody given that when the National Awards were announced in March, Priyanka had promptly tweeted:

I hate losing.But if I had to take a back seat to anyone this year it would be U #KanganaRanaut ! Congratulations!yay Queen!#SmallTownGirls

Kangana and Priyanka also invited their friends from the film fraternity which included the likes of Shraddha Kapoor, Vidya Balan, Aamir Khan, and their directors and co-stars.
While Shraddha and producer Krishika Lulla showed off their skirt style, Vidya nailed it in a sari.
Aamir Khan, who became a Kangana fan after Queen, came in casuals. His nephew, actor Imran Khan, came with his wife Avantika.
Also in twos were producer Ritesh Sidhwani and his wife Dolly; choreographer-filmmaker Farah Khan and Shirish Kunder and actor Dino Morea and Nandita Mahtani.
Social networker Priyanka wasted no time in sharing her favourite moments from the party on Instagram:

Other guests at the party included actress Simi Gerewal and columnist-author Shobhaa De, both of whom looked graceful in white.
Varun Dhawan, Sonu Sood and Mary Kom actor Darshan Kumaar led the male brigade of party guests.
On the board of directors were filmmakers Zoya Akhtar, Mary Kom producer Sanjay Leela Bhansali, Vidhu Vinod Chopra, Aanand L Rai who directs Kangana in Tanu Weds Manu Returns and Tigmanshu Dhulia.
Actor Anupam Kher, who was also in attendance, posted a selfie with the hostesses on Twitter:

Priyanka and Kangana go back together to director Madhur Bhandarkar's Fashion, for which both won National Awards in 2008 - Priyanka the award for Best Actress and Kangana the Best Supporting Actress prize.
Meanwhile, Priyanka will be seen in Zoya Akhtar's Dil Dhadakne Do which is scheduled to release on June 15 and also features Ranveer Singh, Farhan Akhtar, Anushka Shrarma, Anil Kapoor and Shefali Shah. Kangana is gearing up for the release of Aanand L Rai's Tanu Weds Manu Returns on May 22, co-starring R Madhavan.