'Kangana Ranaut is Outspoken, She Inspires Many,' Says Tamannaah Bhatia

"She is strong and outspoken. I always watch her interviews as I love to listen to her point of view," said Tamannaah 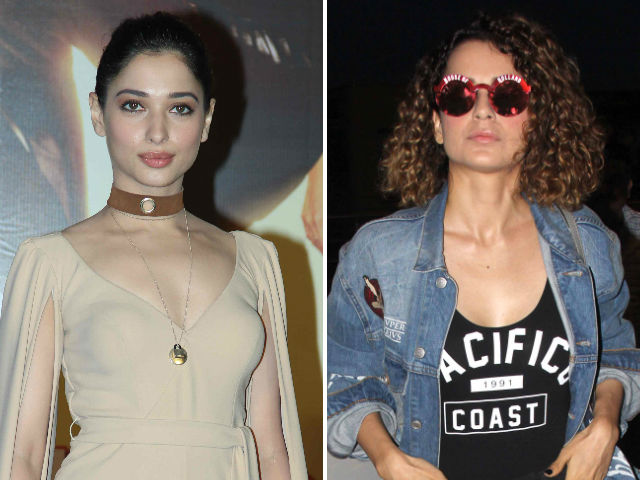 Actress Tamannaah Bhatia is a huge fan of Kangana Ranaut and says the Queen star has become an inspiration for many women.
"I am a huge fan of Kangana Ranaut, not only for her acting. Everybody knows she is a proficient actor. As a woman, she has worked on herself and turned out to be an inspiration for a lot of women. Even in terms of fashion, the way she carries herself is amazing," said Tamannaah.
Earlier at an event for upcoming film Tutak Tutak Tutiya, Kangana said that she is a big fan of Tamannaah who stars in the film.
Reacting to the comment, Tamannaah said: "She is strong and outspoken. I always watch her interviews as I love to listen to her point of view. I think it was a very sweet gesture, what she said about me."
What was most challenging for her in the film?
"I found the role very interesting as my character has two opposite images. One is a village girl and another is a glamorous one. The crucial thing for me was to crack the look. I was given references of (actress) Revathi ma'am's old films," she said.
"The process of shooting was pretty crazy. It is made in three languages, so we had to take the shots three times in different languages. Even in the dance sequences, lip sync was changed thrice. In that way, the film was really challenging," she added.
Talking about the film's cast, she said: "The casting is quite unusual. Me, Sonu (Sood) and Prabhu Deva in lead roles." When asked about Shah Rukh Khan's voiceover in the film, the actress said it is because of Sonu's goodwill that his friends agreed to do guest appearances.
"We are thankful to Farah Khan, Amy Jackson, Esha Gupta and Shah Rukh Khan for being part of the film and making it special for us," she said.
Directed by Vijay, Tutak Tutak Tutiya is produced by Sonu Sood. The film is slated to release in three languages, Hindi, Tamil and Telugu on October 7.
(Except for the headline, this story has not been edited by NDTV staff and is published from a syndicated feed.)