Kangana Ranaut, Kareena Kapoor Are 'Mighty Impressed' With This Actor 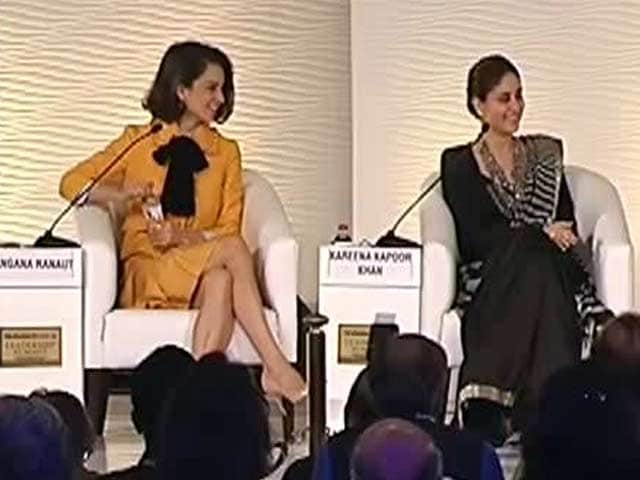 Kangana and Kareena at the HT Leadership Summit in Delhi

At the HT Leadership Summit in Delhi, Kareena admitted that she found the younger lot 'enterprising', an opinion seconded by Kangana who said that she was 'mighty impressed' by actors who had made their debuts after 2010

Actor Varun Dhawan can sing a happy song as both Kareena Kapoor Khan and Kangana Ranaut admitted that if there was a young actor whose career graph and attitude towards work had impressed them both, it was 'Varun Dhawan.'(Also Read: Kangana, Kareena on School, Stardom and Switching Off From Roles)
At the HT Leadership Summit in Delhi, Kareena admitted that she found the younger lot 'enterprising', an opinion seconded by Kangana who said that she was mighty impressed by actors who had made their debuts after 2010 like Alia Bhatt. But it was young Varun who had made an impression on the ladies.
Though both had not watched too many films this year, they gave their vote of confidence to Varun Dhawan.
Kareena also spoke to NDTV about the alleged objectification of woman in 'item numbers' in the film industry. The actress said, "I don't think a woman is objectified. I think it's pretty hypocritical that the same people who are objecting to songs like Baby Doll, Chikni Chameli and Fevicol are playing it at their weddings and parties."
The actress, who will next be seen in R Balki's Ki and Ka opposite Arjun Kapoor, was confident that the film would interest everyone."It's been an amazing shoot and I think the shoot will be fun and quirky. I think it will interest everyone. Normally it's about the man working and a woman sitting at home and cleaning. But this film is about a role reversal," she said.
In her conversation with NDTV on the sidelines of the summit, Kangana spoke about her preference for playing strong characters like in her upcoming film Rangoon. The actress said, "My characters are very strong women. In Rangoon, I play a star from the Thirties. In those days people were a lot more open to women doing action in films.?