"Kangana will always have me by her side and I shall be back in action soon," said Rangoli Chandel 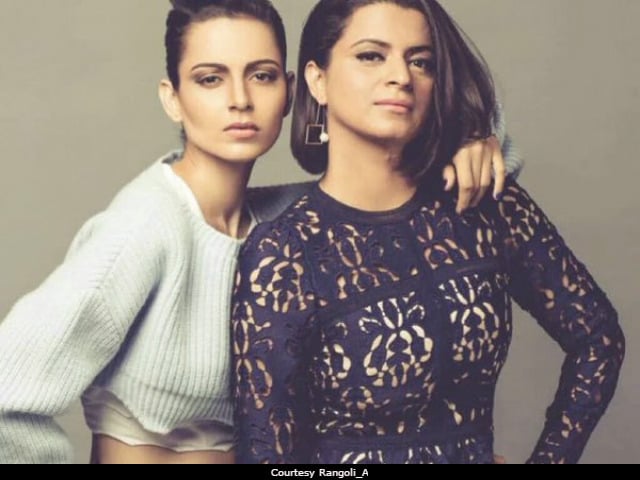 Kangana Ranaut's elder sister Rangoli Chandel has dismissed reports which featured the two sisters as going through a case of sibling rivalry. Reports stating that Kangana and Rangoli have fallen out began doing the rounds of the Internet after Rangoli's absence from Kangana's promotional events and press meets. Rangoli, who is the 30-year-old actress' spokesperson and manager, revealed that she's been advised bed rest due to pregnancy and hence, Kangana's projects are being looked after by their brother Akshit Ranaut.
"I have been by Kangana's side ever since she started off as an actress. She has not only supported us but has also made our careers. I have taken a break from work since I am pregnant and have been advised bed rest. I am glad that Akshit and Kangana spend time out together despite of their busy schedules," IANS quoted Rangoli as saying in a statement. Rangoli, who married businessman Ajay Chandel in 2011, has been working as Kangana's manager since 2014.
Rangoli also revealed that she is expected to re-join Kangana's team very soon. "It is very sad to hear media talking wrong things about us. We have been brought up with great values and our love for each other is never-ending. Kangana will always have me by her side and I shall be back in action soon," she told IANS.
Over the weekend, Rangoli slammed one such report about her rumoured rift with Kangana in strongly worded tweets, writing: "I'm clarifying this one last time that I'm pregnant and have been advised rest. That's why not accompanying Kangana."

If our brother is accompanying her it shows the bonding and lov among siblings pl straighten your twisted minds! @upalakbr999@SaritaTanwar

Meanwhile, Kangana Ranaut has never shied away from sharing the story of her sister's life, who is an acid attack survivor. "Rangoli is a real hero and she should get her due, but we are not the kind of people who go out there and seek acknowledgement for our struggle. Rangoli's story is extremely sensitive," she had told IANS last year.
Last seen in Rangoon, Kangana is all set to return to the big screen with Hansal Mehta's Simran. Kangana will also feature as the protagonist in historical biopic Manikarnika: The Queen of Jhansi, to be directed by Krish.
(with IANS inputs)