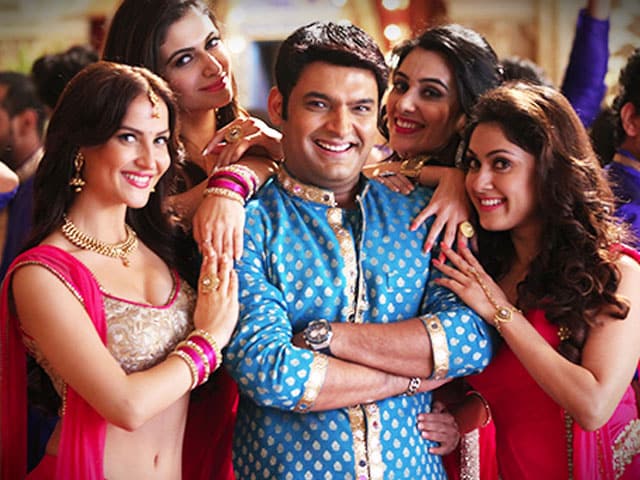 The comedy drama has minted a whopping Rs 18.75 crores just within two days of its release. Forecast has it that it should rake in Rs 30 crores over the opening weekend. "Phenomenal," says Mr Adarsh. The comedy movie with Kapil has reportedly broken the record previously held by Student Of The Year which scored Rs 7.5 crores on its opening day

Kapil Sharma's Kis Kisko Pyaar Karoon is still going strong at the box office, tweets trade analyst Taran Adarsh on Sunday. The TV-comedian's debut venture into the realm of Bollywood has been well accepted by the audience as the movie is gaining popularity on "excellent word of mouth".
The comedy drama has minted a whopping Rs 18.75 crores just within two days of its release. Forecast has it that it should rake in Rs 30 crores over the opening weekend. "Phenomenal," says Mr Adarsh.


#KisKiskoPyaarKaroon has grossed Rs 18.75 cr on FriSat. Should have a Rs 30 cr [/-] opening weekend in India, which is PHENOMENAL.

#KisKiskoPyaarKaroon maintains a STRONG HOLD on Sat. Riding on excellent word of mouth, the film is a BIG HIT with moviegoers in India.

In support of director duo Abbas-Mustan, who previously directed movies like Humraaz, 36 China Town, Race and Race 2, Mr Adarsh said: "Abbas-Mustan are having the last laugh."

Those who mocked Abbas-Mustan for deviating from thrillers & opting for a TV star, well, A-M are having the last laugh. #KisKiskoPyaarKaroon


Not only is the audience enjoying the laugh-riot, even the distributors of #KisKiskoPyaarKaroon are laughing all the way to the bank.

The comedy movie with Kapil has broken the record previously held by Karan Johar's Student Of The Year which scored Rs 7.5 crores on its opening day, reported Box Office India. SOTY too was a launch pad for industry newcomers Alia Bhatt, Siddharth Malhotra and Varun Dhawan.
Kis Kisko Pyaar Karoon's opening day figures surpassed that of Sooraj Pancholi and Athiya Shetty's Hero, which made around Rs 6 crores on its first day. The first day collections are also higher than that of this year's Brothers and Tanu Weds Manu Returns, but lesser than that of Bajrangi Bhaijaan, ABCD 2 and Welcome Back. (Also Read: Kapil Sharma Laughs His Way to Box Office With Record-Breaking First Day)
In his review to NDTV, Saibal Chatterjee says: "Logic isn't the film's strong suit. It is a lame and laboured comedy that might work only for those that have unshakeable faith in Sharma's ability to raise a few chuckles on the odd occasion."
About Kapil Sharma he says: "He obviously is gunning for acceptance as a mainstream Bollywood leading man. Though the returns might be meagre, Kis Kisko Pyaar Karoon is not the end of the road for Kapil Sharma's big screen aspirations." (Read review)
The laugh-riot, which also stars Elli Avram, Simran Kaur Mundi and Manjari Phadnis hit screens on September 25.