Kapoors And Sons Converge For A Family Picture After Christmas Brunch 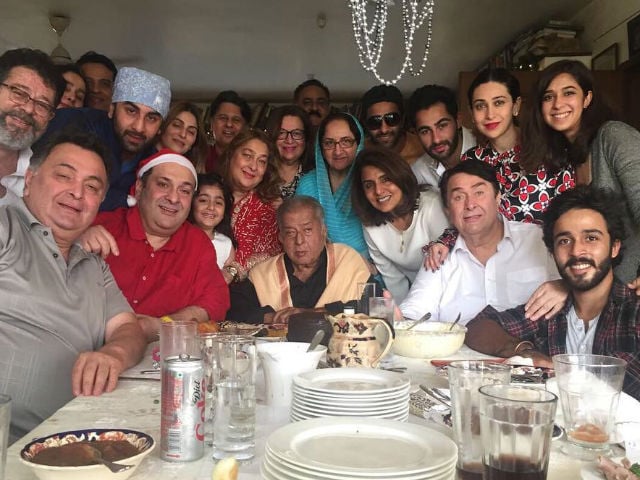 The Kapoors always meet for brunch on Christmas. (Image by Neetu Singh)

The Kapoors is that one big family that Sooraj Barjatya was referring to in Hum Saath Saath Hai - "a family that eats together and says together." The Kapoors converged at Shashi Kapoor's residence for their annual Christmas brunch hosted by family head Krishna Raj Kapoor, wife of legendary Raj Kapoor. The paparazzi only saw them arriving for the party, but Neetu Singh, who is married to Rishi Kapoor shared a family picture which made our Monday. Kareena Kapoor was one of the few who were missing from the family extravaganza. Kareena and her actor-husband Saif Ali Khan hosted their own Christmas party a day before to welcome their newborn son Taimur Ali Khan Pataudi into the family.
But that's another story, for now take a look at this family picture and spot as many Kapoors as you can:

Shashi Kapoor forms the center of the group. Rishi, Randhir and Rajeev (the one with the Santa cap) are there with their children and grandchildren. Ranbir and Kunal and Karisma and Armaan Jain can be spotted together.
Karisma also shared a picture with her cousins:

Pouting with grandma is always cool:

Kareena Kapoor, 36, gave birth to Taimur on December 20 and hosted a party on Christmas Eve. Kareena and Saif, who are regulars at the family brunch, missed the do this year. At Kareena's party, her parents Randhir and Babita, sister Karisma and her children Samiera and Kiaan kept Taimur company. Saif's mother Sharmila Tagore and sisters Saba and Soha too joined the festivities.
Kareena last seen in 2016's Udta Punjab and Ki And Ka, will resume work soon. The actress will start filming Rhea Kapoor's Veere Di Wedding after her maternity break. The Shashanka Ghosh-directed film also stars Sonam Kapoor and Swara Bhaskar.