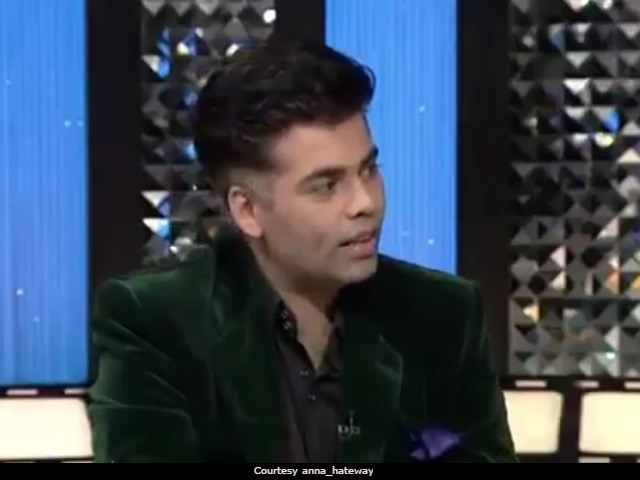 Karan Johar in a still from the video shared on Twitter (courtesy: anna_hateway)

Karan Johar was recently the subject of headlines for his infamous spat with actress Kangana Ranaut over nepotism in Bollywood, which also garnered reactions from several other stars. Just when the hotly-debated public feud appeared to have settled down, an old video of Karan Johar has re-surfaced on social media, in which he admits to being "guilty of nepotism." The video is a snippet of one of Karan's interview with film critic Anupama Chopra which appears to have been shot after Student Of The Year released in 2012. Student Of The Year is the film in which Karan launched the trio of newcomers - Alia Bhatt, Varun Dhawan and Sidharth Malhotra. Alia is the daughter of filmmaker Mahesh Bhatt and actress Soni Razdan while director David Dhawan is Varun's father.
In the video, Karan talks about Varun and particularly Alia, who had to lose a lot of extra kilos for her Bollywood debut, and says: "I've picked up a chubby girl. I maybe saw something, I can't lie. But maybe the fact that she's Mahesh Bhatt's daughter also excited. Right now I'd like to say no but it may have been a very strong sub-layer. And that is nepotism and they are guilty and I'm guilty."
"Would I have cast Varun Dhawan had he not been David Dhawan's son? Because he was David Dhawan's son, he was on my set as an AD (assistant director) and that's why we spent enough time to understand that he can be a movie star," Karan adds. Sidharth also worked as an assistant director for Karan's 2010 film My Name Is Khan.
"Would I have been a filmmaker had I not been a producer's son? I had no experience. I was an assistant on one film and my father had that platform to give me. Therefore, I am a filmmaker," Karan concludes. Karan Johar is the son of late filmmaker Yash Johar and Hiroo Johar.
In February, Kangana was in conversation with the 44-year-old filmmaker on his show Koffee With Karan when she said: "In my biopic, if ever it's made, you'll play that stereotypical Bollywood biggie, who is like you know, very snooty and completely intolerant towards outsiders, flag-bearer of nepotism, the movie mafia." That time, Kangana appeared to be the only Bollywood celeb who thinks nepotism is an inevitable part of Bollywood with other stars claiming to not have experienced nepotistic treatment in the industry.
Watch the video featuring Karan Johar here:

@karanjohar don't say nepotism in bollywood doesn't exist when you admit it yourself...#KanganaRanaut#karanjohar#nepotismpic.twitter.com/CCHsEi3l5l

Soon, a reply from Karan suggested that he's "done with Kangana playing the woman and victim card" and that should "leave the industry" if unable to deal with the way Bollywood functions. This was said in yet-another interviewed with film Anupama Chopra at a pre-event for the LSE-SU India Forum.
Karan Johar is currently enjoying the success of Badrinath Ki Dulhania, which he produced and stars Alia and Varun. Karan recently became parent to twins Roohi and Yash via surrogacy.