The video also shows a huge sticker of Mickey Mouse on the floor, which explains Karan's caption. "The Disney boy looks over us!" is how Karan captioned the video he shared on Twitter 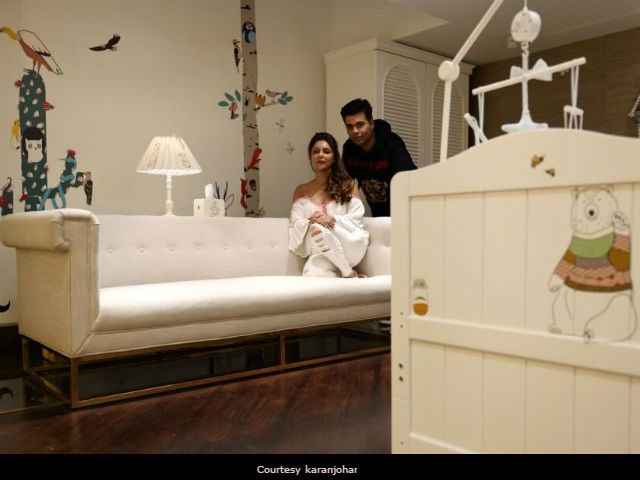 A look inside the nursery of Karan Johar's twins (courtesy:karanjohar)

Filmmaker Karan Johar gave us another sneak peak of Roohi and Yash's delightful nursery, which has been put together by celebrity designer Gauri Khan, Shah Rukh Khan's wife. Karan shared a video on Twitter, which offers a detailed glimpse of the two baby cots - one each for Roohi and Yash. The video also shows a huge sticker of Mickey Mouse on the floor, which explains Karan's caption. "The Disney boy looks over us!" is how Karan captioned the video he shared on Twitter. Earlier this year, Karan Johar became a parent to twins Yash and Roohi via surrogacy. The twins also get cute, starry pillow cases with their names stitched on them, to go with pastel shades bed linen.

Earlier, Karan took us inside his twin's nicely-done nursery by sharing pictures on social media. In the pictures, the newly-turned father can be spotted accompanying Gauri Khan. "My baby nursery designed by Gauri Khan, with so much love and care. It's my paradise!"


My baby nursery designed by @gaurikhan with so much love and care....its my paradise!!! Love you gauri.... pic.twitter.com/2AS6OWhBtw

Karan and Gauri also posed from another corner of the baby room. "The detailing of the baby nursery designed with love and care by Gauri Khan," Karan captioned the picture.


The detailing of the baby nursery....designed with love and care by @gaurikhan

Earlier in March, Karan said in an interview with news agency PTI that seeing his children for the first time made him quite emotional. Karan also revealed that Roohi and Yash had a premature birth in February. "When I saw them for the first time, I didn't realise there were tears rolling down. I couldn't believe they were two big pieces of me who are staring at me, who are innocent, vulnerable. It was the most surreal overwhelming emotion I have ever experienced."
Yash has been named after Karan Johar's late father, celebrated filmmaker Yash Johar and Roohi is a rearrangement of the letters of his mother's name Hiroo Johar.