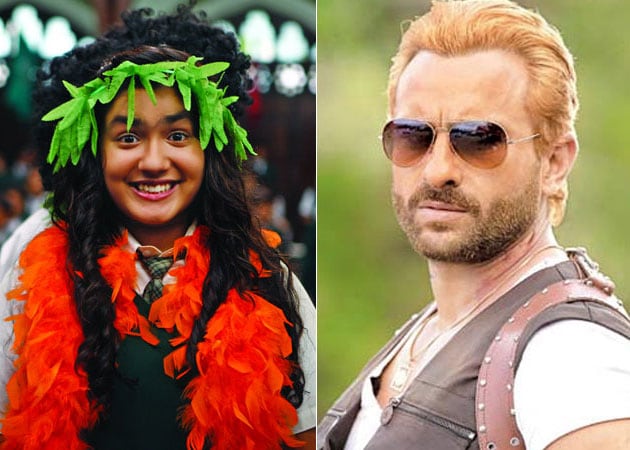 Do you want to have fun with zombies or teenagers? This Friday Zombie comedy Go Goa Gone, produced by Saif Ali Khan, and teenage-drama Gippi from Karan Johar's stable are hitting the screens -- take your pick.
Co-directed by Raj Nidimoru and Krishna DK, Go Goa Gone is touted as Bollywood's first zombie comedy. The movie is produced by Illuminati Films, co-owned by Saif, who will be seen as a zombie slayer Boris in it.
Kunal Khemu, Vir Das, Anand Tiwari and Puja Gupta join Saif in the cast.
In the film, two friends, played by Kunal and Vir Das, join another friend on his business trip to Goa. There Luv (Vir Das) meets Luna (Puja Gupta), a fun loving girl who invites them for an exclusive underground rave party on a remote island, hosted by Indo-Russian Mafioso, Boris (Saif). Their nightmare begins when zombies accost them.
The filmmakers are experimenting with a zombie genre for the first time, and they believe the audience is ready to accept such unconventional genres.
"In fact, we thought it would not be easy to get actors for the film, but luckily Saif was convinced then the things fell into place," said Krishna, who had earlier directed Shor In The City with Nidimoru.
With budget of the film not being revealed by the production houses, it is being said that Go Goa Gone is made on a smaller scale compared to Saif's other productions.
"I would say the budget of the film is very low. I am not allowed to reveal the budget of the film, but I can assure you that the film is made on a much lesser budget than any Saif kind of films," Krishna said.
Gippi, on the other hand, focuses on the life of a 13-year-old girl played by Delhi-based Riya Vij and how she copes with changes in her life.
The film is Sonam Nair's first attempt as a director and she has the backing of Karan, who has produced it under his banner Dharma Productions.
This is also a first for the production house, which has so far explored various genres like family drama with Kuch Kuch Hota Hai, unconventional romance in Wake Up Sid and action in Agneepath, except for exploring children's film genre.
Also, for the first time, Dharma Productions is launching a woman director.
Nair had earlier assisted Ayan Mukerji in Dharma Productions' Wake Up Sid.
The movie revolves around a schoolgirl called Gippi. She studies in IX and the story is about the twists and turns in her adolescent life.
Actress Divya Dutta, who plays her mother, says the movie will take audiences back to their childhood.
"Everyone will feel that we have gone through this. So, when you relate with any film or any promo, you definitely want to watch that film. And Gippi is one of those films and I think it will make its own mark beautifully," she said.