Actress Kareena Kapoor and newborn son Taimur Ali Khan were visited by family in Mumbai's Breach Candy Hospital on Tuesday morning. New dad Saif Ali Khan was pictured outside the hospital with father-in-law Randhir Kapoor, sister Soha Ali Khan and her husband Kunal Khemu. Kareena's sister Karisma Kapoor and best friend Amrita Arora were also at the hospital. Kareena and Saif, who married in 2012, released this statement on Tuesday announcing the arrival of their first child: "We are very pleased to share with you all the wonderful news about the birth of our son: Taimur Ali Khan Pataudi, on the 20th of December 2016. We would like to thank the media for the understanding and support they have given us over the last 9 months, and of course especially our fans and well wishers for their continued affection. Merry Christmas and a happy new year to you all."
Saif was photographed with Randhir Kapoor, and with Soha and Kunal:

Karisma and Amrita, both of whom posted messages on their Instagram accounts, were pictured exiting Breach Candy Hospital: 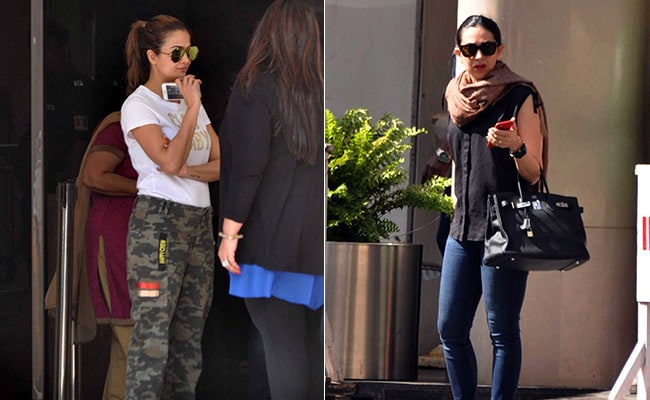 "The family is delighted. Taimur Ali Khan Pataudi is a beautiful baby boy and both mother and son are doing very well!!," Soha Ali Khan told news agency PTI.
A couple of months ago, Kareena Kapoor, 36, and Saif Ali Khan, 46, denied reports of a gender determination test. They also dismissed rumours that the baby would be born in London and would be named Saifeena (surely this was a joke rumour). Their chosen name for baby - Taimur - has raised some eyebrows on Twitter. Several posts have criticized the couple for having picked a name associated with Timur or Tamerlane, who invaded and destroyed Delhi in 1398.
Kareena Kapoor and Saif Ali Khan co-starred in 2006 film Omkara but they only began dating after they made Tashan in 2008. Kareena was last seen in Udta Punjab this year and will work on Veer Di Wedding after a short maternity leave. Saif, last seen in 2015 film Phantom, has the Vishal Bhardwaj-directed Rangoon out next year.
Saif Ali Khan has a daughter and a son with ex-wife Amrita Singh.