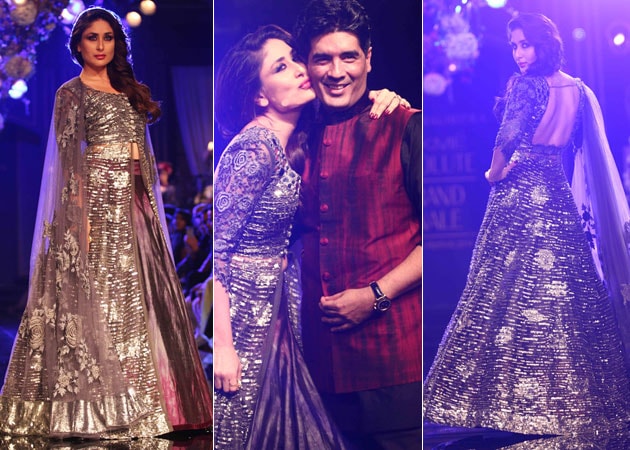 Actress Kareena Kapoor, who was the showstopper for designer Manish Malhotra, looked classy and elegant in his creation at the grand finale of the Lakme Fashion Week 2014.

Actress Kareena Kapoor, who was the showstopper for designer Manish Malhotra, looked classy and elegant in his creation at the grand finale of the Lakme Fashion Week 2014.
Kareena donned a metallic purple lehenga with grey shades and a complete diamond and silver studded open jacket which she teamed with a net chunni.
She said: "I wear what I feel comfortable in. I think Manish is a gift to the film industry and I feel comfortable in all his outfits." The bridal wears were a blend of long gowns, skirts, saris, lehenga cholis with heavy diamond studded sequence and embroidery work.
Manish Malhotra said, "It's been a long journey. She is my sister. She has been the coolest bride I have ever dressed so Lakme can't have a better show stopper than Kareena."
On the Bollywood diva's outfit, Manish said, "I have used two versions of grey. I want this grey to be popular this winter."
Actor Varun Dhawan kick-started the grand finale by walking the ramp wearing black pants and jute jacket which had a velvet red Chinese collar. The runway at the show was decorated with flowers.
Many celebrities, including Kajol, Karan Johar, Huma Qureshi, Karisma Kapoor, Richa Chadda, Juhi Chawla, Dino Morea, Sridevi, Boney Kapoor and Gauri Shinde attended the fashion show.