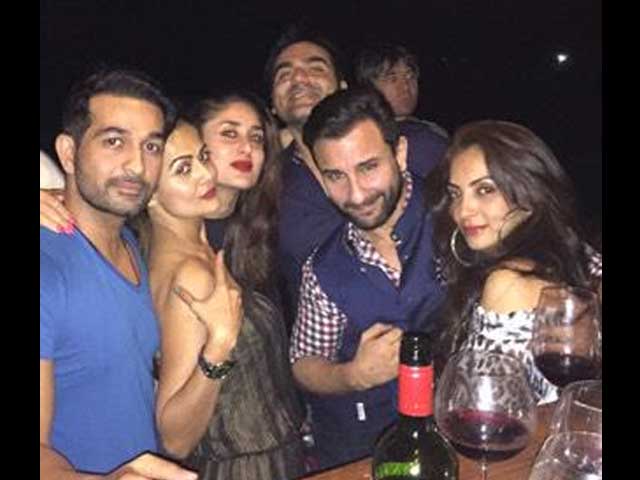 This image was posted on Twitter by amrita arora

It's an odd world when the bride and groom don't make it to a popular honeymoon destination after the wedding, but their family and friends do. That's showbiz for you. Newlyweds Soha Ali Khan and Kunal Khemu are skipping a honeymoon so that Soha can begin filming her new movie Ghayal Returns, but her brother Saif and sister-in-law Kareena Kapoor are partying in Goa for her.

A photo posted by Kareena's best buddy Amrita Arora - they go nowhere without each other, or so it seems - shows her gang of usual suspects living it up in an unnamed Goan hot spot.

Kareena and Amrita pout for the camera in a picture that includes Saif, Amrita's husband Shakeel Ladak, Amrita's brother-in-law Arbaaz Khan, and Arbaaz's sister-in-law Seema. Not in the picture are Arbaaz's wife Malaika and Seema's husband Sohail. It's anybody guess if they managed to make it to Goa at all, or simply didn't make it to the photo.

Kareena and Saif are presumably recovering from Soha and Kunal's wedding madness - they played host at the wedding itself as well as at the reception later. That's reason enough to take oneself off for a beach holiday, should a reason be required.

Soha and Kunal's honeymoon is only on hold, meanwhile - not cancelled altogether. They were married on January 25, after years of dating.