Kareena Kapoor: Saif is the same after marriage 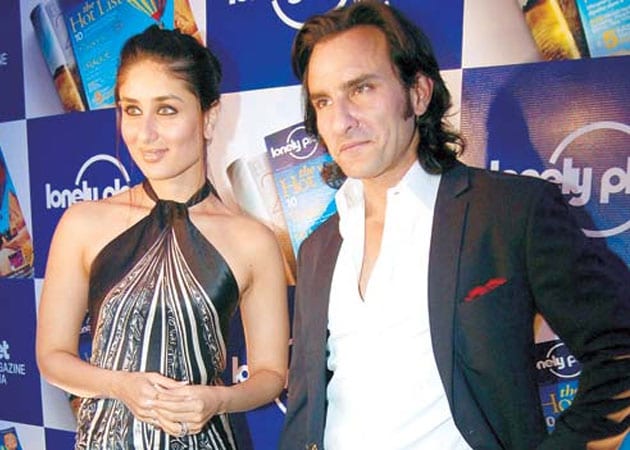 Kareena and Saif were married in October 2012

Actress Kareena Kapoor feels marriage to actor Saif Ali Khan has not changed anything in her life and she hopes the Nawab of Pataudi also remains the same.

Actress Kareena Kapoor feels marriage to actor Saif Ali Khan has not changed anything in her life and she hopes the Nawab of Pataudi also remains the same.
Bollywood star couple Saif and Kareena tied the knot here in October last year after a five-year courtship. "Saif and I were in love and we decided to get married. For us everything is same. Things are going great (in married life). It is just the same even while I was dating Saif... Things are going amazing. Saif is same as before, hopefully he will never change," Kareena told PTI.
"For media and people, it (marriage) seems like a big thing. But in real life it is not like that. There have never been any restrictions. We are surprised when people ask what is the difference after marriage, we fail to understand this as there is no difference. He is in America and we were talking about this thing... it seems surprising," she said.
Though Kareena feels things are same post marriage, there is usually an added responsibility after marriage but for her, singlehood and married life is more or less the same. "Since childhood I was a responsible girl. There was responsibility of the family... First of my mother, then my sister Karisma and now Saif's responsibility. But he (Saif) is pretty much on his own, he is a responsible person, he's quite mature," the 32-year-old actress said.
Kareena believes in giving equal importance to love and work in her life.
"Both (love and work) are equal for me. I have been balancing things. I am an actress who has been open about my relationships. There is nothing wrong in falling in love. "I don't know why people associate love with your career? I don't understand why people ask this? Because love is like the way you breathe air... You love your mother but still you work. I love my mother, family and I still work," she said.
Since her mother-in-law is legendary actress Sharmila Tagore, when asked which films of hers she likes the most, Kareena said she loved her in Amar Prem (1972). "I like Amar Prem a lot, that is my favourite film.
I think that was the best film of hers. I loved her in the film. I won't be part of its remake version as I don't think classics should be remade," she said. On work front, Kareena is looking forward to the release of Prakash Jha's Satyagraha, where she plays the role of a journalist.
"She (my role in the film) is the voice, truth of the film. Because the responsibility of a journalist is to report truth, she sums up everything that takes place in this revolution.
"She is the voice of this revolution. It is the most important part in the film and that is why I wanted to be a part of it. Considering what is happening in the country, this is a very relevant film, it will inspire people," she said. The film has an ensemble cast including Amitabh Bachchan, Arjun Rampal, Ajay Devgn, Manoj Bajpai and Amrita Rao.
"We (Kareena and Bachchan) did two good films together Kabhi Khushi Kabhi Gham, Dev and now Satyagraha. It is a great film. This film has Amit uncle, Arjun Rampal and Ajay Devgn. I have worked with them earlier as well in various films. I have been friends with the entire team of the film, so the atmosphere was great. I had a nice experience working with everyone," she added.