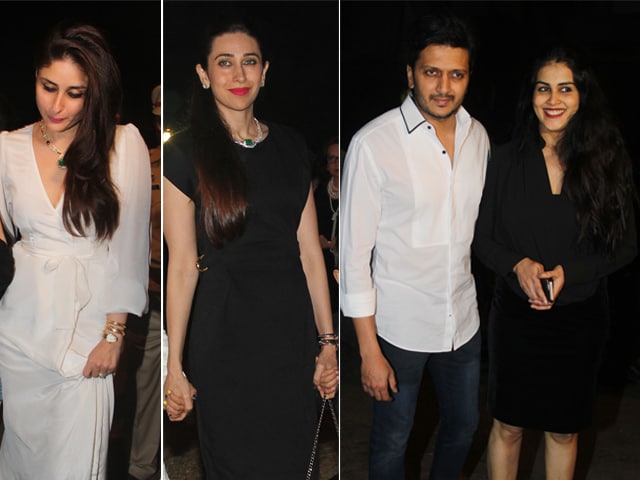 Kareena, Karisma, Ritiesh and Genelia at a Midnight Mass.

As per usual, Kareena and Karisma attended the mass with their mother Babita and Karisma's children Samiera and Kiaan Raj Kapoor

Bollywood celebrities like Genelia D'Souza, Riteish Deshmukh and the Kapoor sisters - Kareena and Karisma, started their Christmas celebration with a traditional Midnight Mass in Mumbai.
Traditionally Christmas celebrations begin with a Midnight Mass, which starts either at or sometime before midnight on Christmas Eve. The ceremony, which is held in churches throughout the world, celebrates the birth of Christ, which is believed to have occurred at night. (In Pics: Kareena, Karisma, Riteish and Genelia at Christmas Mass)
As per usual, Kareena and Karisma attended the Midnight Mass with their mother, former actress Babita and Karisma's children Samiera and Kiaan Raj Kapoor.
Kareena wore a white dress teamed with a dazzling diamond necklace and finished out her look with wavy hair and smoky eyes.
Karisma wore a black body-con outfit, which she teamed with studded pointed pumps and a diamond and emerald necklace.
In another part of the town, actor couple Riteish Deshmukh and Genelia D'Souza was also spotted at a Christmas Mass, sans their son Riaan. New mom Genelia teamed a fitted velvet skirt with a loose black top.