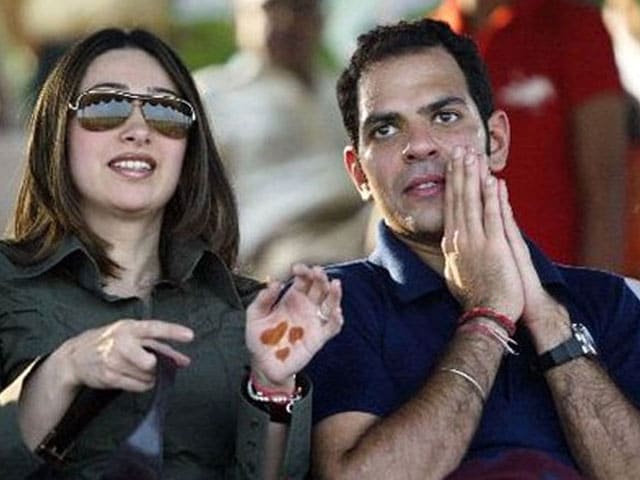 Karisma and Sunjay were on the verge of finalising their divorce

On the day of the final hearing, the estranged couple, who had filed a mutual consent divorce petition in the city family court six months back, got into a loud argument and were packed off by the judge to work out a settlement by February

The divorce proceedings of Bollywood actress Karisma Kapur and her husband, Delhi-based industrialist Sunjay Kapur have reportedly hit a roadblock because of their failure to agree on a few issues related to the welfare of their children.

According to a report in The Times of India, on the day of the final hearing, the couple, who had filed a mutual consent divorce petition in the city family court, got into a loud argument and were packed off by the judge to work out a settlement by February.

The celebrity couple were present in court along with their lawyers before principal judge Laxmi Rao on the date when they were to get their decree. But both failed to agree to the terms of a trust being set up for the welfare of their two minor children, Samaira and Kian Raaj Kapoor - Karisma reportedly wanted to have more say over the trust than she was getting and Sunjay was unwilling to let go of his control.

Sunjay was the first to move the Bandra family court on May 31 this year. He filed a custody petition for the children, saying Karisma was seeing someone else. The estranged couple then converted the custody plea into a mutual consent divorce petition in June.

When both sides got loud in court, the judge directed them to come back with a final settlement, after working it out amicably outside the court, or withdraw their joint petition for divorce under the Hindu Marriage Act.

Once a mutual consent plea is filed, there is a six month cooling off period to give time to both sides for a rethink, at the end of which if they still want to split, divorce is granted.  Karisma is represented by divorce lawyer Kranti Sathe, while Sunjay had two top lawyers coming in from Delhi.

The TOI report further states that Karisma's alleged love interest, pharma company honcho Sandeep Toshniwal, has his divorce plea pending in the same court before another judge. He had filed for divorce in 2011 and for permanent custody of his two minor daughters, now aged nine and six. His wife, a doctor, demanded Rs 5 crore as permanent alimony, Rs 75 lakh in damages, and Rs 3 lakh each as monthly maintenance for the daughters.

The warring couple had a date set in court on December 29 for hearing a plea made by Toshniwal's wife against him.

Karisma's lawyer apparently declined to comment on the proceedings stating that the matter was "pending compliance" and "is being worked out amicably".

Karisma married Sunjay on September 29, 2003, a time when she was at the peak of her acting career. Their marriage reportedly hit rock bottom after the birth of their daughter Samaira who was born in 2005.