Katrina Kaif Collects Smita Patil Award, the One That She Was Mocked For

Katrina Kaif was announced as the surprise pick for this year's Smita Patil Memorial Award. "I believe it is a matter of great pride that we have an award that acknowledges and recognises the contribution of women to cinema" she said Actress Katrina Kaif collected the Smita Patil Memorial Award in Mumbai on Monday, an honour that has been mocked and ridiculed widely on social media.
Katrina, wearing a heavily embellished Sabyasachi ensemble, received the award from Union Minister Nitin Gadkari and delivered a graceful speech dedicating the award to women achievers in the country and beyond.
"I believe the world of cinema, not only Indian cinema, is often called a man's world. It is changing but the change is slow. So I believe it is a matter of great pride that we have an award that acknowledges and recognises the contribution of women to cinema," said the 33-year-old actress.
Katrina also paid tribute to Smita Patil, after whom the award is named: "This award honours the memory of one of the greatest and accomplished actresses whose role served as an inspiration to the lives of millions of women. It is said that woman hold up half the sky but a woman like Smitaji showed us not even the sky is the limit."
Katrina revealed that she was overwhelmed by the honour. "As an actor, the love of the people is the biggest reward. But when there is recognition from the industry, in the form of an award, for me it is very overwhelming," she said. 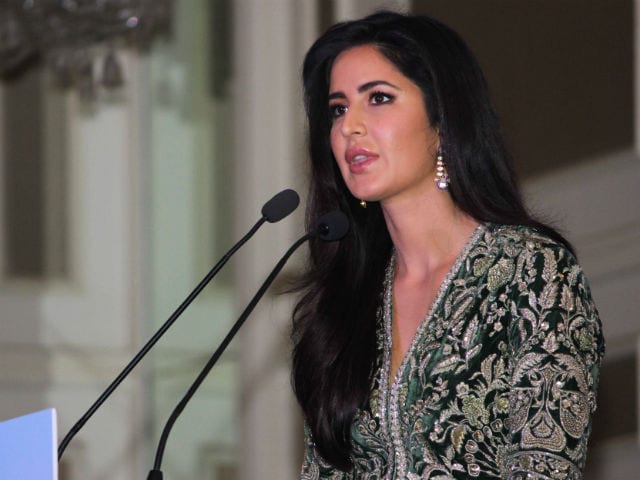 "I believe the most important thing in an art is truth. And I can promise that my attempt is sincere and truthful to the craft, which has largely given me my purpose in life over the last few year," she added. "The one thing I do hope is I can continue to make the audience, who has given so much love and support over the last few years, proud of me and to deserve their love and support as they have given me."
Katrina thanked her fans and accepted the award on behalf of "every woman who seeks to excel in her field."
The Smita Patil Memorial Award is given out by the Priyadarshini Academy and past recipients have included the likes of Vidya Balan, Tabu and Tanvi Azmi. Katrina's joining these hallowed ranks has been received with hooting and jeering on social media. The irony of awarding Katrina, who is commonly considered a limited actress severely handicapped by her inability to speak Hindi, a prize that celebrates one of the country's most revered talents escaped nobody.
When the announcement was made last week, Twitter exploded with jokes:

Don't make fun of Katrina kaif, surviving in Bollywood after breaking up with Salman Khan is a big talent.

The people who decided to give the Smita Patil award to Katrina Kaif must be smacked in the face. Is there no sense left in this world?

Katrina Kaif, who was chosen by the socio-cultural and educational organisation Priyadarshini Academy for her 'outstanding contribution to cinema,' was last seen in the tepidly-received Baar Baar Dekho. The star of films such as Bang Bang and Zindagi Na Milegi Dobara, Katrina has Jagga Jasoos with Ranbir Kapoor coming up next and will begin filmingTiger Zinda Hai with her Ek Tha Tiger co-star Salman Khan.
Watch Katrina Kaif's full speech here: