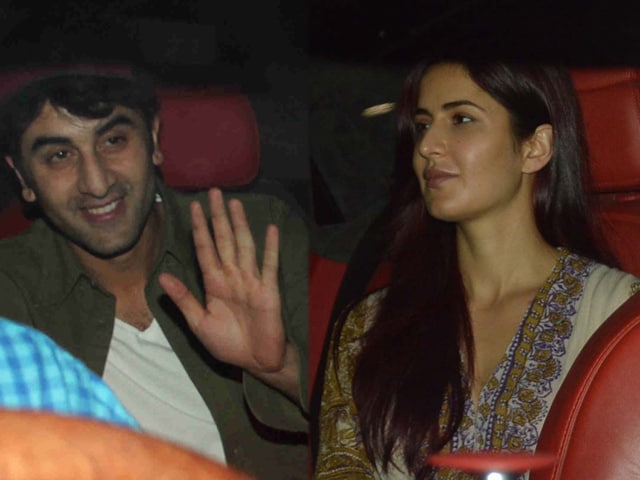 Ranbir and Katrina on their way to Aarti Shetty's party.

Katrina was shooting for Fitoor, while Ranbir was busy with Tamasha

Actors Katrina Kaif and Ranbir Kapoor, who've been busy shooting their respective films on location, were spotted on their way to entrepreneur Aarti Shetty's party at her Mumbai residence on April 1.
Keeping it simple, Katrina looked pretty in a printed white top. She's been busy filming Abhishek Kapoor's Fitoor and then flew to London for the unveiling for her wax statue at Madame Tussauds. (Also Read: Katrina Kaif Unveils Her Waxwork at Madame Tussauds in London)
Ranbir, who has been shooting for Imitiaz Ali's Tamasha first in New Delhi and then in Shimla, looked happy to be back in town. (Also Read: Ranbir Kapoor Overkill? Tamasha Postponed)
Katrina and Ranbir will be next seen together in Jagga Jasoos, which is the first film made by Ranbir's production house Picture Shuru Productions, which he co-owns with his Anurag Basu, who directed him in Barfi! and is directing Jagga Jasoos. (In Pics: Katrina, Ranbir's Party Night With Karan & Gang )
Aarti also invited filmmaker Karan Johar, with whom she will be collaborating on the Dhyanchand biopic.
Actor Sidharth Malhotra, who is one of Aarti's close friends, was also on the guest list. The actor, who will be next seen in Karan's film Brothers, was busy chatting on the phone as he arrived for the party.