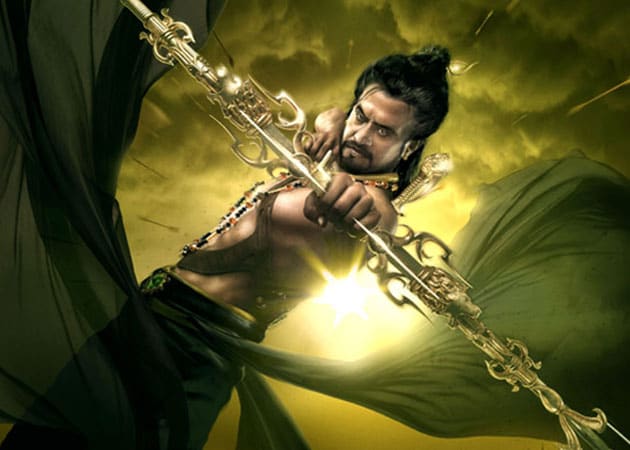 The Hindi trailer was launched by Amitabh Bachchan in Mumbai on March 9 with his wife Jaya and daughter-in-law Aishwarya attending.

This Rajinikanth may be an animated version of the superstar's larger-than-life celluloid self, but his death, gravity and logic-defying feats rival those of the flesh-and-blood hero. In the long-looked for and just-released Hindi trailer of Kochadaiiyaan, Rajinikanth plays the bare-chested battle-hardened warrior of the title and his descendant, the spear-wielding Rana.
Deepika Padukone as Vadhana, a princess of Disney-esque proportions and appeal, appears variously dancing, looking coy and practicing martial arts. Jackie Shroff appears as Raja Mahendra, R Sarathkumar as Sengodagan and Shobhana as Yaahavi.
Some weeks ago, Kochadaiiyaan writer K S Ravikumar issued a health warning to fans asking them to view it as an animated film and not as a "typical Rajinkanth film." He needn't worry - nobody but Rajinikanth, as Kochadaiiyaan/Rana, could jump his chariot right over the heads of a band of enemies or be launched from sea into mid-air balanced on the nose of the dolphin.
Kochadaiiyaan is a film that has been long in the making, beginning life as the period piece Rana to be directed by K S Ravikumar, also the writer. The film was interrupted by Rajinikanth's illness in 2011 which put him in a Singapore hospital for some months. After he flew home to recover, daughter Soundarya announced on Twitter that the film would now be animated using performance motion capture and that she would be taking over as director.
The Hindi trailer was launched by Amitabh Bachchan in Mumbai on March 9 with his wife Jaya and daughter-in-law Aishwarya attending. Kochadaiiyaan which was meant to release on April 11 will now release on May 1 in Tamil, Telugu, Hindi, Japanese, Bengali, Bhojpuri, Marathi, Punjabi and English.
Watch: