In the image the actor shared on Instagram, Akshay features with his Housefull 3 co-stars Jacqueline Fernandez, Lisa Haydon, Riteish Deshmukh, Abhishek Bachchan and Jackie Shroff. His mother-in-law, actress Dimple Kapadia can also be spotted in the pic Actress Asin, who starred in Housefull 2, doesn't return in the third film of the series but she was included in the action by the cast of the new movie who on Tuesday 'gatecrashed' the New Delhi home she shares with her husband, Micromax founder Rahul Sharma.
Asin's home was literally housefull, as this pictures posted by her friend and colleague Akshay Kumar proves - count them: Riteish Deshmukh, Lisa Haydon, Abhishek Bachchan, Jacqueline Fernandez, Asin, Jackie Shroff, Akshay, Rahul and Akshay's mother-in-law Dimple Kapadia. Phew (PS: Asin should loosen her grip on Jacqueline):

The Housefull 3 cast were in the city to promote their film and attend the HT Most Stylish Awards: 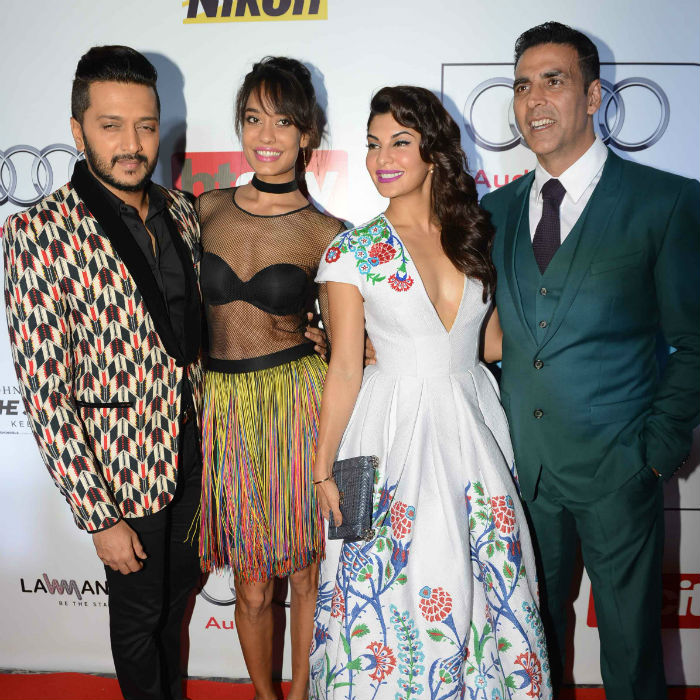 The cast of Housefull 3 at HT Most Stylish Awards in New Delhi.

Akshay introduced Asin and Rahul Sharma and was best man at their wedding in January.
He often visits the Sharmas and featured in pictures posted earlier by Asin on her own Instagram page:

Directed by Sajid-Farhad, Housefull 3 will hit the screens on June 3.