Love, Celeb Breakups, Zindagi: We're Obsessed With the Lives of Others 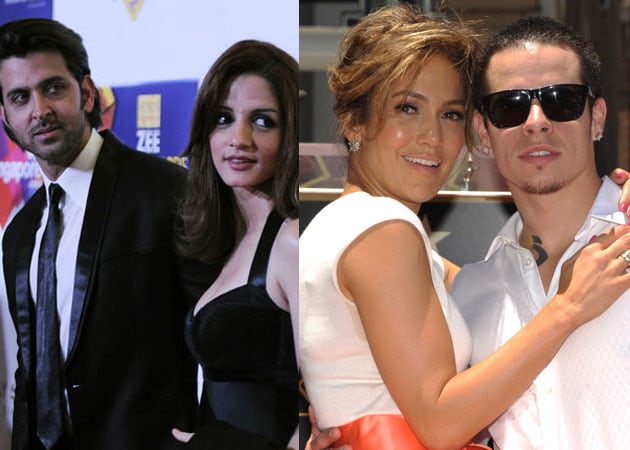 Hrithik Roshan-Sussanne Khan, Jennifer Lopez-Casper Smart are among the many couples who decided to part ways in recent times.

The ball for the seventh season of Splitsvilla on the idiot box is ready to roll, but in the real world of celebrities - Hollywood or Bollywood - it's been quite a season of splitsville already! Love, breakups, it's zindagi, I guess.

The ball for the seventh season of Splitsvilla on the idiot box is ready to roll, but in the real world of celebrities - Hollywood or Bollywood - it's been quite a season of splitsville already! Love, breakups, it's zindagi, I guess.
Almost every now and then, we're caught in the midst of 'stories' with celebrities - in Hollywood, Bollywood and all of these 'woods' - 'calling it quits', 'parting ways', 'filing divorce', 'going separate ways' and, yes, 'heading to splitsville'. No fun, really.
What's the 'entertainment', I'm curious, in someone else's heartbreak, sadness, loneliness and insecurity? But these, as one finds, meander as 'news', sometimes as screaming headlines, and often, as back page or late night 'masala'. (Also read: Day After Filing for Divorce, Hrithik-Sussanne Celebrate Son's Birthday Together )
That Karisma Kapoor-Sanjay Kapur's marriage has not worked out for the best has been a matter of constant intrigue over the past few years. Of late, one has seen increased reportage on the split of the Bollywood 'Greek god' Hrithik Roshan with his childhood sweatheart Sussanne Khan; of acclaimed filmmaker Anurag Kashyap with the talented actress Kalki Koechlin; tennis ace Leander Paes with Rhea Pillai and, of course, actress Chitrangada Singh with golfer Jyoti Randhawa.
In the Hollywood world, one has been fed with details of love gone kaput in the case of Jennifer Lopez-Casper Smart, Rita Ora-Calvin Harris, Ashton Kutcher-Demi Moore, Gwyneth Paltrow-Chris Martin and the likes.
It's all out and open - split wide open about the splits - with the five Ws-one H (Who, What, Where, When, Why and How) questioned repeatedly, without fail.
Then, we talk of 'private lives'. Do they have one, really? Do they even have the right to one, I wonder?
Seemingly not, it seemed more so following a recent chat with the Indo-Canadian porn superstar Sunny Leone, who is now creating new waves in Bollywood. (Also read: Casper Smart Leaves Jennifer Lopez's Home After Split )
"As actors and entertainers, we live a very open book life, and this is the lifestyle we've chosen. No matter how much you try to hide from people, it's going to come out. It's an inevitable thing," said the 'Baby doll', who is basking in her own fairy tale romance with Daniel Weber.
The words came out from her confidently, but with a 'sorry' sounding tone. That's what it is - a sorry state of affairs - where 'fairy tale' stories of love and romance are perhaps best kept for the celluloid.
Interestingly, Sunny is now the host of a fresh season of MTV Splitsvilla. It's a dating reality show, rather a 'hunt for love', where 20 girls will woo and vie for the attention of seven men. People can 'dump' each other, and it's all in good fun really - unless of course, someone finds 'true love'.
Entertainment!
Relationships are becoming volatile and fragile, agreed. But entertainment as frivolous as this - is it needed? In the already confused state of mind that the youth seems to be in, there seems to be a constant feed for more confusion from the world of showbiz on love, relationships and friendships, which in my opinion, are food for life.
But voila! A channel official disclosed that as many as 68 million people tuned into the sixth season of the show, and they expect to draw more with the forthcoming season. I wonder if I'm excited.
To dear Sunny Leone, it all seems fine. But what when it's publicised via a show?
"Ummm whether it's right to publicise it well, they're on a show, so they should be okay with its publicity," she said.
I differ, miss.
Maybe celebrities have become accustomed to having their life out in the open, and even aspiring celebrities as in on Splitsvilla, but for most common men and women, love, breakups are emotions about their zindagi and are best kept private.