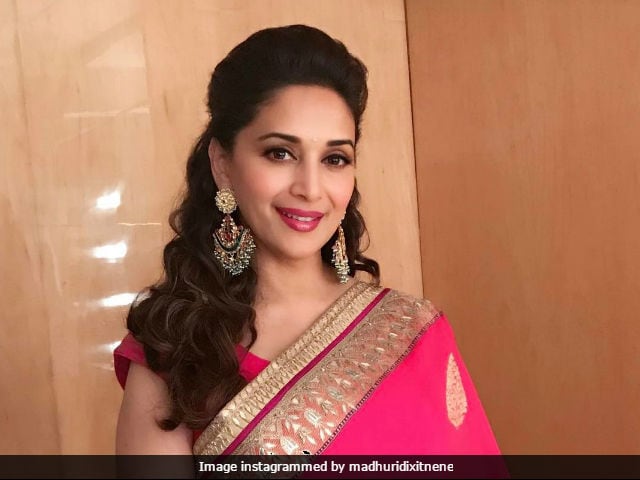 Actress Madhuri Dixit is celebrating her 50th birthday today and wishes are pouring in from her fans and colleagues. From Bollywood celebrities like Juhi Chawla, Anil Kapoor to photographer Avinash Gowariker, sweet messages have been posted on social media to make the extremely talented actress' day special. Madhuri Dixit made her Bollywood debut with 1984 film Abodh. In a career spanning over three decades, Madhuri won six Filmfare Awards. In 2008, she was awarded the Padma Shri, India's fourth highest civilian award. Ace celebrity photographer Avinash Gowariker, in a post on social media shared a beautiful picture of the Pukar actress and wrote that Madhuri Dixit has 'one of the best faces ever.'
See the lovely photograph shared by Avinash Gowariker here:


Here's wishing a very HappyBirthday to @madhuridixitnene!One of the best faces ever! Keep that magical smile going for ever. #MadhuriDixit

Actress Juhi Chawla, who co-starred with Madhuri Dixit in 2014 movie Gulaab Gang, shared a collage featuring of two pictures. One picture is a still from their movie whereas the other is from a photoshoot that they did together. The 49-year-old actress wrote: "Sparkle and shine @MadhuriDixit !! Happy birthday !!"

Actor Anil Kapoor, who worked with Madhuri Dixit in films like Parinda, Ram Lakhan and Tezaab, also wished his dear friend on Twitter. The 60-year-old actor retweeted a collage from a fan club which features pictures from their film Tezaab.

Jackie Shroff also extended his best wishes to the actress on her special day. Jackie Shroff and Madhuri Dixit have co-starred in films like 100 Days, Tridev and Khalnayak .

Among other Bollywood celebrities who wished Madhuri Dixit on her 50th birthday were - Riteish Deshmukh, Aditi Rao Hydari and Sonali Kulkarni.


The epitome of beauty, elegance & grace. No wonder she is addressed as the one and only. Happy Birthday Dear @MadhuriDixitpic.twitter.com/IHLSTWvNyA

Here's to the queen of a million dollar smile, the epitome of grace..inspiring millions like me.
Happy Birthday @MadhuriDixit#MadhuriDixit