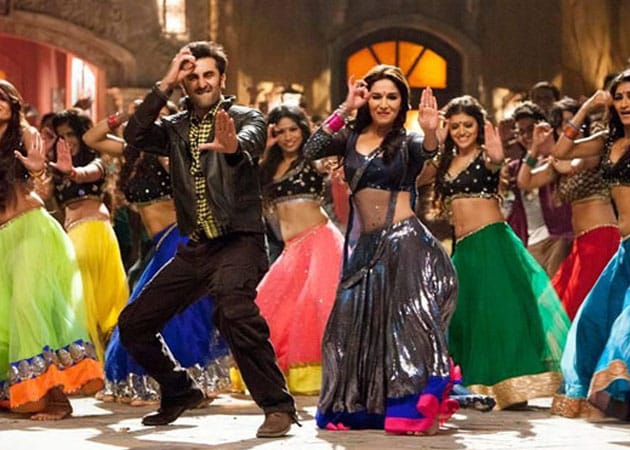 Madhuri Dixit attributes her dancing abilities to her mother.

When it comes to dancing, Madhuri Dixit is inimitable. The 1980s and 1990s dancing diva, who is creating magic again by teaming up with current heartthrob Ranbir Kapoor in the song Ghagra, says that dance forms haven't changed, but have gotten better technically.

When it comes to dancing, Madhuri Dixit is inimitable. The 1980s and 1990s dancing diva, who is creating magic again by teaming up with current heartthrob Ranbir Kapoor in the song Ghagra, says that dance forms haven't changed, but have gotten better technically.
"Nothing has changed much. I don't see that much of a change. The way the camera is handled and the way it moves is more restless. But songs are songs, just technically they are better," Madhuri, known for hit numbers Ek do teen and Dhak dhak, among others, told.
Ghagra is a special song from Ayan Mukerji directed Yeh Jawaani Hai Deewani. Releasing Friday, the romantic drama has been produced by Karan Johar under his banner Dharma Productions.
The actress said she had a blast shooting for the song.
"It was wonderful, we had a blast. Karan and me gel together. Ayan is a fabulous director, I really liked his film Wake Up Sid. I was very impressed with it. It was very well made. Then there was Ranbir and that is his introduction song. I have seen him in so many films and I loved his Badtameez dil," she said.
The actress attributes her dancing abilities to her mother.
"It was her desire that we learn dancing as she couldn't," said the actress, who teamed up with her mother for a song in Gulab Gang.
"It was wonderful. There was this portion Soumik Sen wanted me to sing and he asked me if I was ready. I was like, lets do it. We recorded a part of it. It was fun, my mom also sang. It was a great feeling to see mom in that recording theatre," added the 46-year-old.
Madhuri carries forward her love for dance with Jhalak Dikhhla Jaa 6. She will be seen co-judging the dance reality show with Karan and Remo D'Souza.
When asked how she feels when contestants dance on her popular numbers, she said: "It is great to watch them because it is their interpretation. I try to see if they are getting themselves into it. That is what impresses me."
In terms of acting, she just wrapped up Gulab Gang and is about to finish Dedh Ishqiya. The films mark her comeback on the big screen after six years, post Aaja Nach Le.
Talking about the two films, she said: "I am thrilled. That is why I did these two movies. They are very powerful roles and I enjoyed working on them."
What kinds of roles does she look for?
"The roles should be powerful enough and I should enjoy working on them. It should be something that when I wake up in the morning, I should be looking forward to it," she said.
Post marriage with US-based doctor Shriram Nene in 1999, Madhuri stayed away from the greasepaint, arclights and cameras for a while. But fans never stopped showering their love on her.
She felt that with adulation comes responsibility too.
"It is wonderful that they love me so much. I also think a sense of responsibility comes as you have to maintain that... every time you dance, you have to see what different you can do. When people love you, adore you and give you that much attention, it comes with a sense of responsibility too," she said.
The actress is known for hits like Tezaab, Ram Lakhan, Saajan, and Beta.