Madhuri Dixit: Never thought of Juhi Chawla as my competitor 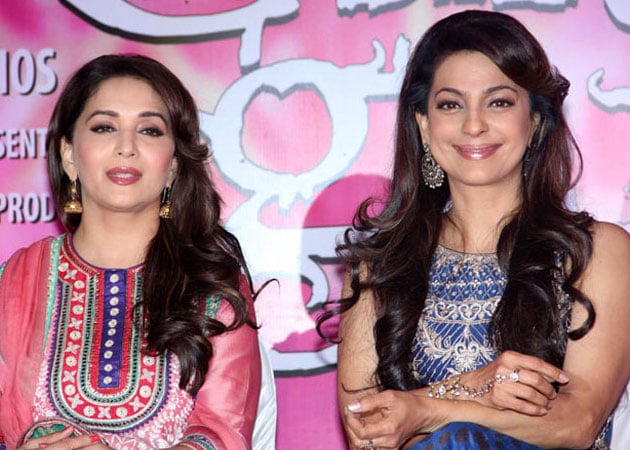 Madhuri Dixit and Juhi Chawla are set for an interesting face-off onscreen as the avenger and the villain respectively in Gulaab Gang.

The two contemporaries did not work together in the past, both shinning in their respective careers, but years later Madhuri Dixit and Juhi Chawla are set for an interesting face-off onscreen as the avenger and the villain respectively in Gulaab Gang.
In her interviews, Juhi has said that the reason they probably did not work together was because there was lot of competition between actresses at that time. Madhuri, however, says she never thought of Juhi as a competitor and it was finally inspiring to work with her in the film, releasing on March 7.
"I never thought of her as my competitor. I never had any qualms about working with anyone. This is my thinking that we are actors not horses running towards one finish line. It is a creative field and we like certain roles and work with people we like. It is not that I have not worked in two-heroine projects earlier. I worked with Preity Zinta (Yeh Raaste Hain Pyaar Ke), Aishwarya Rai (Devdas) and Karisma Kapur (Dil To Pagal Hai)," Madhuri told PTI in an interview.
Madhuri, 46, says it was inspiring to see Juhi at work in Gulaab Gang  and they have several very tight scenes together in the Soumik Sen directed movie.
"It is wonderful that we did a film together finally. She is a good actress. It is inspiring to see another good actress work with you. I think our scenes are very tight and I would definitely love to work with her again," says Madhuri.
Madhuri, who made her debut in 1984 with film Abodh, became the queen of hearts with the success of films like Tezaab, Beta, Dil, Hum Aapke Hai Kaun, Pukar and Dil To Pagal Hai.
She disappointed her fans by deciding to take a break from acting to get married and raise a family in the US. But she did not quit completely and continued to do films like Devdas and Aaja Nachle before finally moving back to India in 2011.
Madhuri has been busy with TV shows, advertising deals, and her online dance academy 'dancewithmadhuri.com' since her return. She made a grand comeback on the big screen as an ageing seductress in the recently released Dedh Ishqiya where she was paired opposite Naseeruddin Shah. Madhuri and Juhi will soon be seen on the silver screen in Gulaab Gang
In Gulaab Gang, Madhuri will play the role of a justice-seeker, who along with a group of women, fights social injustices.
"It is a strong role. When Soumik brought the story to me, I thought it was entertaining, massy and yet it had a lovely message. Rajjo is a vigilante and believes in education of women. She believes woman should be given the tools to be independent," says Madhuri.
The actress says other than the character what attracted her to the part was that she would get to do lot of action in the movie, something she has never done before.
"My character believes that rod is god. She has her goals straight. And then there is Juhi, who is playing this negative, mean and power-hungry politician. I feel it could have been two men but they happen to be two women," says Madhuri.
Gulaab Gang has been produced by Anubhav Sinha. The actress is glad that she is in Bollywood at a time when things are changing for good for women, a phenomenon, she would have thought impossible earlier.
"Times are changing, a woman's role in society is changing and there is an attitude change everywhere. There was a time when I never saw female assistant directors, camerapersons or a makeup artistes. There were women directors but you could count them on your fingers," recalls Madhuri. She feels new age directors should share credit for writing interesting roles for women rather than caging them in stereotypes.
"The women are no longer caricatures like an avenger, victim or an eye candy. They are people, characters. There is a change even in mainstream roles. I like what Deepika (Padukone) did in Cocktail and even in Chennai Express where her role was equally important to that of Shah Rukh Khan. This change is nice and a step in the right direction," she says.
The actress says she has a lot to look forward to career- wise while being a mother to her two children - Arin and Raayan - and wife to her doctor husband Sriram Nene.