Madhuri Dixit's acting made me feel I was on screen: Sampat Pal 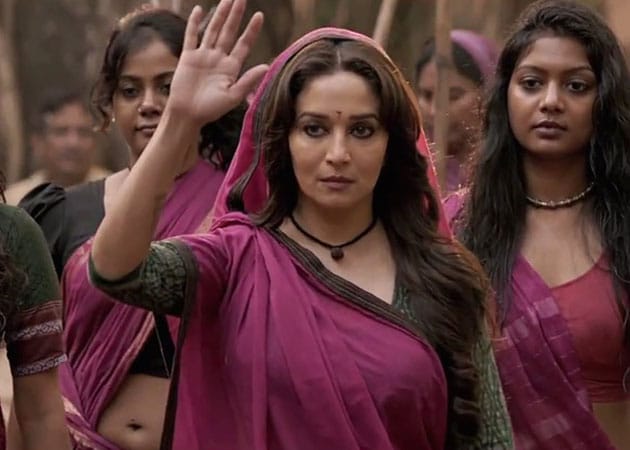 Vigilante activist Sampat Pal may be angry with the producers of Gulaab Gang but in Madhuri Dixit's character she finds a reflection of her own life so stark that it makes her feel "it was me on screen".

Vigilante activist Sampat Pal may be angry with the producers of Gulaab Gang but in Madhuri Dixit's character she finds a reflection of her own life so stark that it makes her feel "it was me on screen".
"The battle about the movie has not ended and I will keep it going till my demands are met, but Madhuri has definitely impressed me with her acting skills in the movie," Sampat Pal, founder of the vigilante group Gulabi gang, told PTI. "Madhuri's acting did remind me of my journey and of the times I have been through. I felt it was me on the screen," she said, adding she has nothing against the actors and her fight is against the producers including Anubhav Sinha.
Sampat Pal had moved the court seeking a stay on the film's release claiming that her permission was not sought prior to making of the film and had alleged that it contains defamatory content which would adversely affect her reputation. The Delhi High Court on Thursday allowed the film to be released across the country but with a disclaimer that it has nothing to do with the life of Pal and her organisation.
Sampat Pal watched the movie on Friday (March 7) along with her lawyer and said all the incidents portrayed were similar to her story, which was written by Amana Fontella Khan in her book 'Pink Sari Revolution'.
"The filmmakers are claiming that its not my story, but after watching the movie, I am even more sure. It has all what my life has been all about," she claimed. "Giving a disclaimer won't change the reality. I am right here, the movie has the same story which has been written by Amana Fontella Khan in 'Pink Sari Revolution'. How can Madhuri Dixit's character 'Rajjo' be a fictitious one," she asked.
"How I protested against violence against women, how I approached the CM when electricity wasn't available in remote areas of Bundelkhand, how I had to go to jail, how I got a Congress ticket from the Manikpur constituency in Chitrakoot district in the 2012 UP Assembly polls, it's all there in the movie," she said.
Sampat Pal, a child bride and former government health worker, formed the gang of pink sari-clad women in 2006 which works for rights of women in impoverished Bundelkhand region of Uttar Pradesh and Madhya Pradesh.
The group, which also has a chapter in France, was formed as a response to widespread domestic abuse and other violence against women. The pink sari clad women visit abusive husbands and beat them up with 'laathis' unless they stop abusing their wives.
Sampat Pal, who also appeared on popular television reality show-Big Boss in 2012, criticised the filmmakers for calling her petition a 'publicity stunt'. "The film makers might call it a stunt to attract publicity, but I will keep the battle going. And as far as publicity is concerned, neither my gang nor me has been short of coverage in national or international media," she said. Rubbishing reports of being ousted from the gang by the national convener of the organisation, Pal said, "My gang is just a group of people with similar ideology. I founded the gang, whoever wanted to support, joined me. But who has the authority to throw me out of the gang. If somebody is unhappy with me or my ideology, he or she can go and form a separate group."
The decision to replace Sampat Pal was reportedly taken at a meeting of the Gulabi Gang members held last Sunday (March 2) at Gaura Baba Dham in Atarra area on the borders of Banda and Chitrakoot. The meeting was convened by national convener of the group Jai Prakash Shivhare who accused Pal of misusing the gang's reputation and name to serve personal interests.
Sampat Pal, who has lived a large part of the last few years in the public glare, said that its an attempt to tarnish her reputation.
"It's an attempt to malign my image and if it goes on I might file a defamation suit," she said. British filmmaker Kim Longinotto's documentary 'Pink saris', Nistha Jain's documentary 'Gulabi Gang' and foreign author Amana Fontella Khan's book 'Pink Sari Revolution: A Tale of Women and Power in India' have also been based on the Gulabi Gang.