Madhuri Dixit's Dedh Ishqiya to hit the screens this Friday 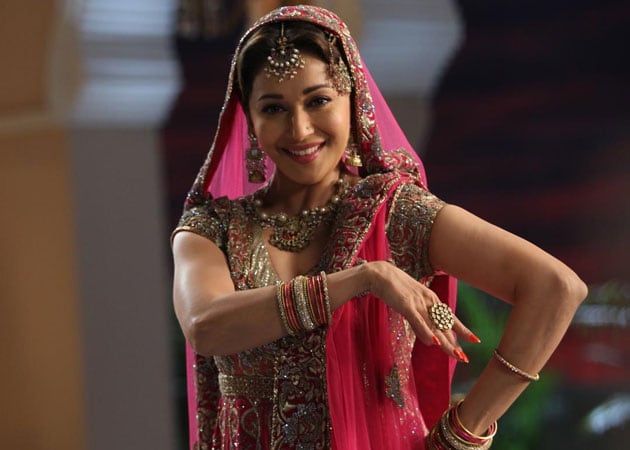 Madhuri in a still from Dedh Ishqiya

After a gap of seven years, Bollywood actress Madhuri Dixit is returning to the silver screen to woo moviegoers with Dedh Ishqiya.

After a gap of seven years, Bollywood actress Madhuri Dixit is returning to the silver screen to woo moviegoers with Dedh Ishqiya. The film, which is releasing on Friday, is not a regular masala movie and has loads of entertaining elements, including the actress' never-seen-before look. The weekend also has another love story, Yaariyan, hitting the screens.
Even though the film is a sequel to the 2010 movie Ishqiya, it is apparently different in its treatment and subject.
Although director Abhishek Chaubey dropped Vidya Balan, seen in the original, he has retained Arshad Warsi and Naseeruddin for the part two. Huma Qureshi also joins them in the cast.
Naseeruddin and Arshad will reprise their roles of Khalujaan and Babban respectively from the original movie.
Made on a budget of approximately Rs 15 crore, the women-centric hinterland drama has been jointly produced by Raman Maroo of Shemaroo Entertainment and Vishal Bharadwaj, who has also co-scripted the film.
For those looking for teenage, candyfloss romance, debutante director Divya Khosla's Yaariyan may satiate their appetite.
Yaariyan features Miss India 2011 Rakul Preet Singh, TV show Humse Hai Life actor Himansh Kohli, Miss Earth 2010 Nicole Faria and Serah Singh. Produced by T-Series, the music for the film has been composed by Pritam, Mithoon, Yo Yo Honey Singh, Arko Pravo Mukherjee and Anupam Amod.
Divya Khosla, who is married to producer Bhushan Kumar, has also choreographed five songs for the college-based romantic drama. The songs are Baarish, Meri maa, Love me thoda aur, Allah waariyan and Zor lagake haishaa.
The film fraternity has supported Yaariyan in different forms.
For instance, Yaariyan title was registered with Saif Ali Khan's company but he gave it to Kumar for free. Another well-known filmmaker, Mahesh Bhatt, launched the trailer of the film.
The film was earlier expected to release on January 31, but Bhushan Kumar decided to release it in advance after an encouraging response to the film's first song ABCD, which got one million views on YouTube within just two days of its release.
While Dedh Ishqiya is known for its star cast, Yaariyan has been in the news for its music.
"Both the films are equal. Dedh Ishqiya has Madhuri, but the music of Yaariyan has been appreciated. Both the films will manage well," Rajesh Thadani of Multimedia Combines told IANS.
Even Yaariyan is a Rs 15 crore film.
While both the films have had minimal promotions, each will hit approximately 1,200-1,500 screens.