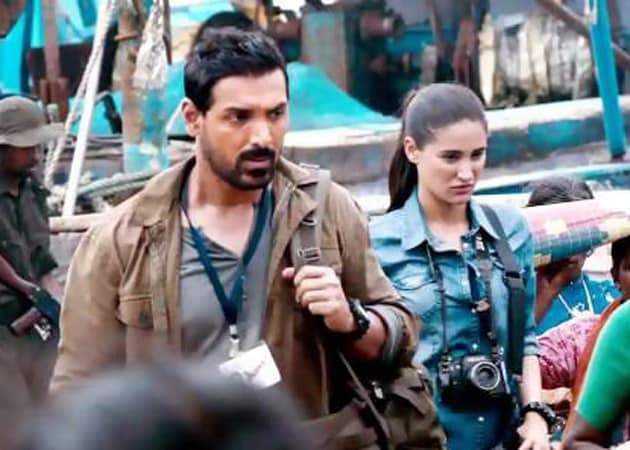 The director feels the film will change people's perception about its lead actors.

Filmmaker Shoojit Sircar feels that his upcoming film Madras Cafe, based on the Sri Lankan civil war, will change people's perception about its lead actors John Abraham and Nargis Fakhri - as he has extracted their best performance.

Filmmaker Shoojit Sircar feels that his upcoming film Madras Cafe, based on the Sri Lankan civil war, will change people's perception about its lead actors John Abraham and Nargis Fakhri - as he has extracted their best performance.
After being in the industry for close to 10 years and being part of hit films such as Dhoom, Dostana, Housefull 2, Race 2 and Shootout At Wadala among others, John has often been written off.
Nargis, on the other hand, who made her debut in Bollywood with Rockstar was criticised for her dead pan expressions and failed to capitalise on the film's success.
But Shoojit feels that after Madras Cafe hits theatres, things are going to change for both the actors.
"Every person has acting ability, it depends how you use it. My film Vicky Donor was purely about actor and characters. I don't leave any actor. I suck their blood and I make them act. I don't know how I do it but I manage. After this film whatever critical approach one has for John and Nargis it will change. That I can assure you in written format," said Shoojit.
John was always on Shoojit's mind for the political thriller but he did not think of Nargis at least initially.
"Since beginning only John was there in the film. Nargis was never on my mind but I knew Nargis much before Rockstar. I introduced her to the film industry because I did one commercial with her. Then Imtiaz picked her up. Though he received lot of criticism," the director said.
Shoojit calls this film as a re-launch for Nargis. He is confident that people will like her in the film and that she will be absolutely a new find.
With Vicky Donor which was a commercial entertainer Shoojit attained box office success but he insists that he has not compromised on Madras Cafe.
"I have said to the marketing people don't do anything which will take away the seriousness of the subject. We are talking about people who are suffering or have suffered. So we should not take undue advantage of the film to make a gimmick of it. The film is a thriller not a documentary," he added.
Shoojit says he has no expectations from this film.
"Even if (people) they don't like it... it is okay. I am not bothered because if I get bothered I can't make films. I have to make many films... I have lot of story ideas. I have honestly made this film and I believe there is an audience to appreciate my honest effort," he added.
His previous film Vicky Donor was a light hearted entertainer but Madras Cafe is not.
"This is a difficult script and a difficult subject for me. It took a long time to prepare the script because we were not satisfied with the script. The film is completely researched by me and my team," he said.
"Earlier we were concerned that John is there so people should not mistake it as a romantic film. But now the trailer is out and people know it's a serious film," he added.
Shoojit insists the film portrays RAW agents in a realistic manner and they won't be jumping off bikes or doing high-octane stunts.
With this film, people will come to know how real RAW agents work.