Make Your Own Choices: Amitabh Bachchan in Letter to Granddaughters Amitabh Bachchan, 73, has written an open letter to his granddaughters Navya Naveli, 18, and Aaradhya, 4, filled with wisdom, good advice and life lessons.
Navya is the daughter of Shweta Bachchan and Nikhil Nanda; Aaradhya's parents are actors Aishwarya Rai and Abhishek Bachchan.
In his letter, Big B reminds Navya and Aaradhya that they are not only bearers of famous last names but also girls and that because of their gender, people will tell them how to lead their lives.
Don't listen to these people, is their grandfather's message. Don't listen to those who tell you "how to dress, how to behave, who you can meet and where you can go," writes the actor. "Don't let anyone make you believe that the length of your skirt is a measure of your character," he says. Marry because you want to, pick your own friends and make your own decisions, advises Big B - people will talk, don't listen.
In a video, Big B explained that his was a letter to granddaughters everywhere. The full text of his letter is reproduced below.

The full text of his letter is reproduced below. 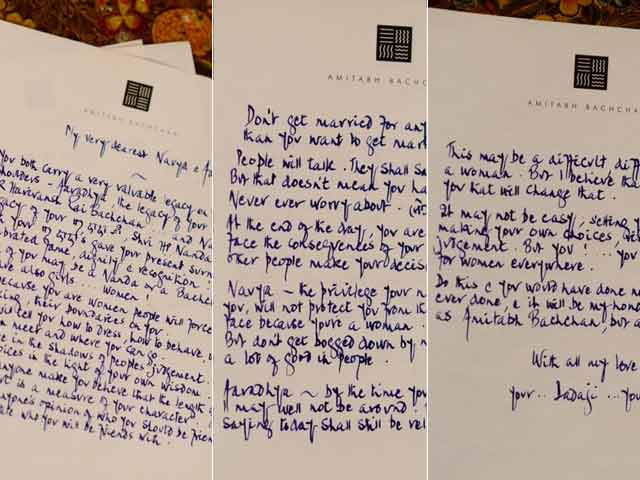 Amitabh Bachchan, one of India's most revered stars, next appears in a film that examines how women are subjected to the 'forced thinking' and 'boundaries' he lists in his letter. Pink, co-starring Taapsee Pannu, tells the story of three young women accused of extortion by the men against whom they filed a complaint of sexual assault. Read Amitabh Bachchan's letter to his granddaughters:
My very dearest Navya & Aaradhya
You both carry a very valuable legacy on your tender shoulders - Aaradhya, the legacy of your Par Dadaji, Dr Harivansh Rai Bachchan...and Navya, the legacy of your Par Dada , Shri H P Nanda....
Both your Par Dadajis' gave your present surnames celebrated fame, dignity and recognition !
Both of you maybe a Nanda or a Bachchan, but you are also girls...women !
And because you are women people will force their thinking, their boundaries on you.
They will tell you how to dress, how to behave, who you can meet and where you can go.
Don't live in the shadows of people's judgement. Make your own choices in the light of your own wisdom.
Don't let anyone make you believe that the length of your skirt is a measure of your character.
Don't let anyone's opinion of who you should be friends with, dictate who you will be friends with.
Don't get married for any other reason other than you want to get married.
People will talk. They shall say some terrible things. But that doesn't mean you have to listen to everyone. Never ever worry about - Log Kya Kahenge !
At the end of the day, you are the only one who will face the consequences of your actions, so don't let other people make your decisions for you.
Navya - the privilege your name, your surname offers you, will not protect you from the difficulties you will face because you're a woman.
Aaradhya - by the time you see and understand this, I may well not be around. But I think what I am saying today shall still be relevant.
This may be a difficult, difficult world to be a woman. But I believe that it is women like you that will change that.
It may not be easy, setting your own boundaries, making your own choices, rising above people's judgement. But YOU !...you can set an example for women everywhere.
Do this and you would have done more than I have ever done, and it will be my honor to be known not as Amitabh Bachchan, but as your grandfather !!
With all my love
Your ....Dadaji ....your Nana