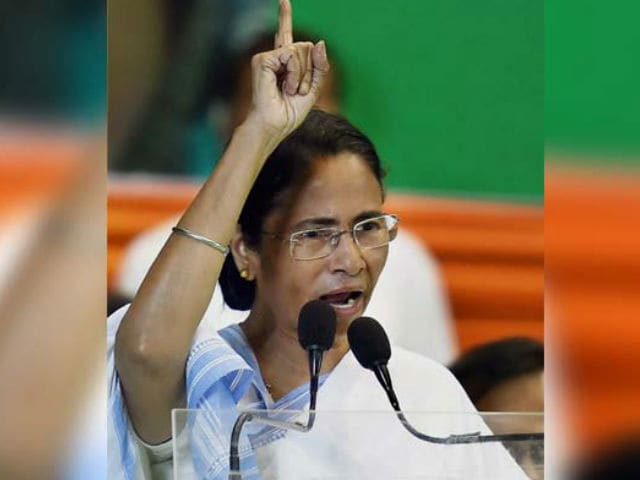 Mamata Banerjee said, 'What I eat is my business.' (Image courtesy: PTI)

After actress Kajol posted and then deleted a video in which she referred to eating beef, West Bengal Chief Minister Mamata Banerjee has denounced those who "are trying to dictate what others will eat," reports news agency PTI. Ms Banerjee also spoke about an actress recently having to delete a video in which she said she ate beef, describing it as an 'alarming situation.' Mamata Banerjee didn't name the actress, referring to her only as having worked with Shah Rukh Khan often, but she didn't need to - Kajol, SRK's co-star from films such as Dilwale Dulhania Le Jayenge, was trolled this week for a social media post that mentioned beef.
Mamata Banerjee said, "I won't name the actress. She has worked in many films with Shah Rukh Khan. Recently she had posted a video online following which she was harassed and trolled online. She had to clarify that it was not beef but buffalo meat. It is an alarming situation," PTI reports. She was speaking at a rally in Dinajpur, West Bengal.
The sale and possession of beef is banned in several parts of the country. Mamata Banerjee has previously censured the ban, telling a gathering of Muslims in December 2015 that "whatever you eat is your individual choice." Last month, Ms Banerjee condemned what she said was an attempt on the BJP's part to label her 'anti-Hindu.' Speaking to workers and leaders of the Trinamool Congress in Kolkata's Netaji Indoor Stadium, Mamata Banerjee said, "They (BJP) say I ate beef. What I eat is my business."
On Sunday, Kajol posted a video on her social accounts of a meal cooked by a chef friend - in it, she joked about 'cutting his hands off' for cooking beef. Trolled, the 42-year-old actress later deleted the video from her Instagram and Facebook pages. On Monday, she tweeted this clarification, describing the video as a 'miscommunication': "A video of me at a friend's lunch said that there was beef dish at the table. That's a miscommunication. What was shown was buffalo meat, that is a legally available meat. I'm issuing this clarification because this is a sensitive matter that may hurt religious sentiments, which is not my intention."
In Maharashtra, contravention of the ban on beef is punishable by a jail sentence of five years and a fine of Rs 10,000.
(With inputs from PTI)