Manasvi Mamgai is the daughter of Shalabh Kumar, an US-based industrialist and a key member of Donald Trump's transition team 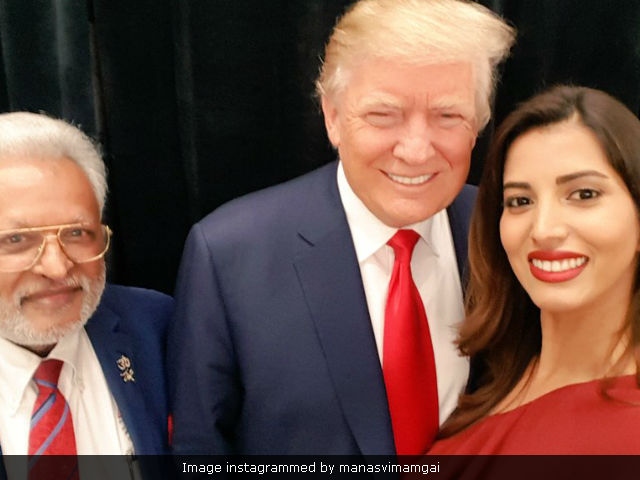 Model and actress Manasvi Mamgai, who will perform at US president Donald Trump's inauguration, is one of the top trends online today. Indian-born Manasvi, 27, is among the handful of celebrities who will perform at the function in which Republican Donald Trump will be sworn in as the 45th president of the United States. Manasvi recently joined the POTUS-elect and her father Shalabh Kumar, an US based industrialist and a key member of Mr Trump's transition team, at his thank you rally in Orlando. She also met the First Daughter-to-be, Ivanka, at the Trump Tower in New York City. Manasvi, who is often called the 'Indian Ivanka,' told NDTV on The Buck Stops Here: "I take that as a compliment. Ivanka is also from the glamour industry and look now, where she is."
Manasvi Mamgai, who won the Miss India title in 2010, has so far worked in just one Bollywood film - Prabhu Deva's Action Jackson along with Ajay Devgn and Sonakshi Sinha.
Manasvi Mamgai instagrammed a picture from her dance routine for the event:

Singer Mika was spotted at President Trump's inauguration dinner and shared a selfie with his daughter Ivanka:


What a privilege it is being in the same vicinity as @realDonaldTrump..His presence has brightened up the whole evening. pic.twitter.com/Kd9l3i2KDy

Enjoying this wonderful party..thanxx @IvankaTrump for such a great hospitality.. it is lovely meeting you God bless pic.twitter.com/0sLcWsekKW

Donald Trump, who won the November 8 election despite losing the popular vote by 2.8 million - more than any winning candidate in history - will be sworn in as the US President today. On Thursday night, he attended a "Make America Great Again" concert at the Lincoln Memorial, where country singer Toby Keith and 3 Doors Down performed.