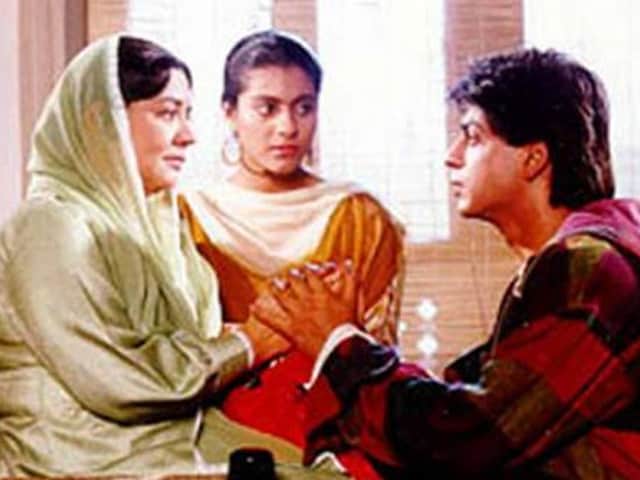 Farida Jalal, Kajol and Shah Rukh Khan in a still from DDLJ

Veteran actress Farida Jalal's role as Kajol's mother in blockbuster film Dilwale Dulhania Le Jayenge carved a special place for her. As Maratha Mandir brought down the curtains on DDLJ after 20 years, FaridaJi said that the final curtain call is sad but the movie will live in the hearts of people forever.
"It is sad that it (the film) is leaving. They (theatre owners) shouldn't have removed it and let it run," the actress told IANS. "But the charm of the movie will live on forever," she added. The film, which won 10 Filmfare Awards, including Best Film, Best Actor, Best Aactress and Best Director at the 1996 edition of the ceremony, had been running uninterrupted at this single-theatre cinema hall at its usual playing time slot of 11.30 am. And the last show of the film was held on February 19. (Also Read: The End. Maratha Mandir Shows Dilwale Dulhania Le Jayenge For Last Time)
The film, which was first screened at Maratha Mandir in October 1995, was in its 20th year of uninterrupted run at the iconic cinema hall. It also holds the record of the longest running film in the history of Indian cinema.
Faridaji also said that no other movie can recreate the magic of DDLJ, which featured Shah Rukh Khan, Kajol, Anupam Kher and late Amrish Puri. "No movie can match the mark it created. It was one of a kind movie. We had so much fun while shooting for the film. I cherish all the memories around it," she said.
Produced by the late Yash Chopra, the film marked Aditya Chopra's debut as a director.
DDLJ has a simple story - a fun loving London-based Punjabi boy Raj (Shah Rukh) meets simpleton Simran (Kajol) during an European holiday. Love blossoms between them, but winning over the girl's conservative family is not a cakewalk for the hero, who then makes every effort to take his dulhania (bride) with him.
Be it the Raj and Simran chemistry, iconic dialogues like Bade bade shehron mein chhoti chhoti baatein hoti rehti hain or 'Ja Simran ja, jee le apni zindagi, mustard fields -- all the unforgettable hallmarks of DDLJ live on.