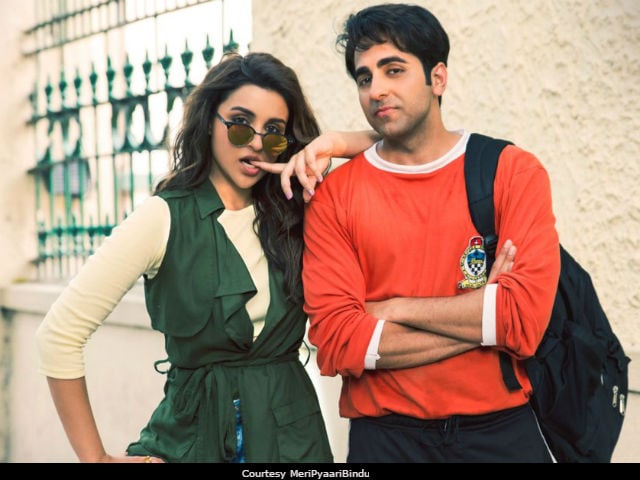 Parineeti Chopra and Ayushmann Khurrana return as college buddies Bindu and Abhi in the second trailer of Meri Pyaari Bindu, which released today. Meri Pyaari Bindu's promotional strategy appears somewhat similar to that of Shah Rukh Khan's Dear Zindagi, which released glimpses of the film instead of a full-fledged trailer. Team Meri Pyaari Bindu also promises to treat fans with five trailers in total, unveiling one on each day of this week. We have three more to look forward to. Tuesday's trailer, titled Gabbar Aur Sambha, is the perfect medicine to your mid-week blues. Have no doubts, for Parineeti's cheerful laughter is infectious.
Ayushmann stars as a Bengali author named Abhimanyu, who often dives into his most-treasured section of memories to relive the happier times spent with Bindu, each of which form the chapters of a book he's writing. The second chapter, which has been incorporated in the second trailer, is a detailed documentation of fun-loving Bindu and Abhi's adventures, led by Bindu of course. Abhi explains that he was the Sambha to her Gabbar and the Circuit to her Munna.
Abhi also revealed Bindu's life-mantra: "Zindagi ek pighalti hui ice cream ki tarah hai. Taste nahi kiya toh waste ho jayegi." Meanwhile, Parineeti described the trailer like this: "As crazy as it gets."
Tuesday's trailer is a chronological continuation of the first chapter from Abhi's book, titled Samosa Aur Chutney, in whic cute, younger versions of the characters were featured.
Watch the second trailer of Meri Pyaari Bindu: