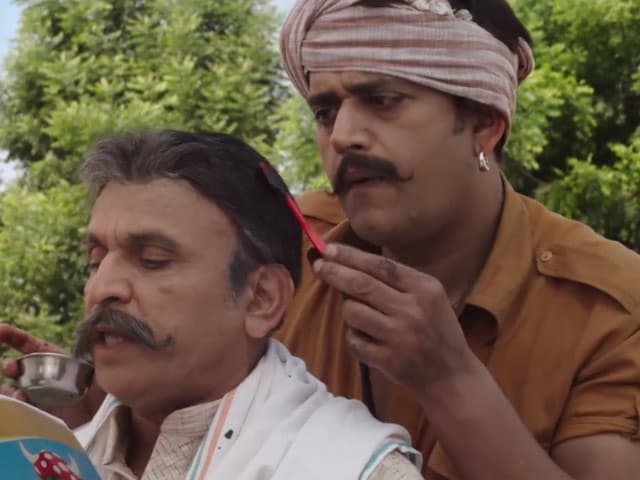 Annu Kapoor and Ravi Kishan in a still from Miss Tanakpur Haazir Ho.

Vinod Kapri, director of forthcoming political satire Miss Tanakpur Haazir Ho, is seeking police protection after receiving death threats from a Khap panchayat in Uttar Pradesh.
Miss Tanakpur Haazir Ho, the trailer of which has earned praise from industry members like Amitabh Bachchan and Rajkumar Hirani, as well as viewers is said to be based on true incidents.
The film narrates the story of a man who is falsely accused of molesting a buffalo, Miss Tanakpur, by a village strongman who persuades the Khap panchayat to pass a verdict that he has to marry the victim.
A Khap panchayat in Uttar Pradesh is said to have announced that they will give 51 buffaloes to anyone who beheads director Vinod Kapri.
Considering this announcement, Mr Kapri said in a statement, "Actually, I'm a little shocked and worried. Shocked about the death threat. But at the same time I'm relieved that what I wanted to show through my film has already been proven by such statements. I'm worried for my family, not for myself."
"I'm seeking police protection because I'm here in Mumbai and my family is in Noida (Uttar Pradesh). In this busy schedule of releasing the film just two weeks later, I'm constantly thinking about my family at the back of my mind. So if they are protected I would be relieved," he added.
When asked whether he was planning to file a case against the Khap panchayat ruling, Vinod Kapri said, "No, I would not want to lodge any complaint against them. But yes, I would request them to act sensibly, logically and responsibly. Such immature and illegal statements are not expected from Khap panchayats ruled by the experienced and elderly.
"I respect them and want to request them to be patient and not pass such immoral judgments without even seeing the film."
Miss Tanakpur Haazir Ho, which stars Annu Kapoor, Ravi Kishan, Om Puri, Rahul Bagga and Hrishita Bhatt, will hit theatres on June 26.