MOM Poster: Sridevi Shares Yet Another Intense Poster Of The Film

On Thursday, Sridevi shared a new poster from her upcoming film on social media. In the intriguing poster of MOM, the 5-year-old actress' eyes do all the talking 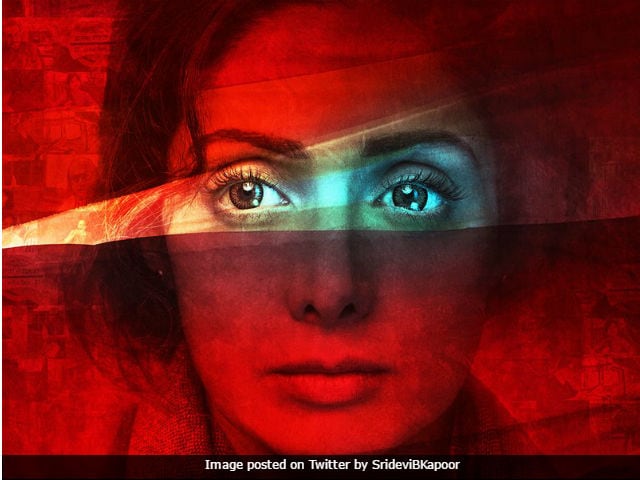 Actress Sridevi is all set to make her comeback to the big screen with MOM, directed by Ravi Udyawar. On Thursday, the 53-year-old actress shared a new poster from her upcoming film on social media. In the intriguing poster of MOM, Sridevi's eyes do all the talking. The makers of the film have been sharing new posters to countdown the release of the film's trailer on June 3. On Wednesday, three posters of the film were unveiled on social media. In all three posters, the Lamhe actress featured with different characters from the film. In MOM, Sridevi portrays the role of protagonist, a mother, who seeks revenge for injustice done to her daughter.
See the new poster of MOM here:


Keep an eye out for #MOMTheFilm. Trailer out on 3rd June.@ZeeStudios_@Nawazuddin_S@MomTheMovie@arrahman@raviudyawarpic.twitter.com/BmK17eY6Zf

MOM, which is Sridevi's 300th film, also stars Nawazuddin Siddiqui, Akshaye Khanna, Abhimanyu Singh, Sajal Ali and Adnan Siddiqui.
In an earlier interview to news agency PTI, Nawazuddin Siddiqui said that Sridevi was the main reason as to why he signed the film. "When I was approached for the film I just couldn't refuse as it was an opportunity to act with Sridevi," PTI quoted Nawazuddin Siddiqui as saying.
Speaking about the film, the 42-year-old actor told PTI: "I am happy to see this new look of mine in the film. The film gave me an opportunity to do something different and look so different."
MOM has been co-produced by Boney Kapoor, Sunil Manchanda, Mukesh Talreja, Naresh Agarwal and Gautam Jain. The makers of MOM unveiled the trailer of the film on April 1.
Sridevi's last Bollywood film was English Vinglish, directed by Gauri Shinde. The film was her first movie after a gap of 15 years and earned her the Filmfare Best Actress Award. Sridevi was last seen in 2015 Tamil movie Puli.
MOM is scheduled to release in theatres on July 7.
(With PTI inputs)