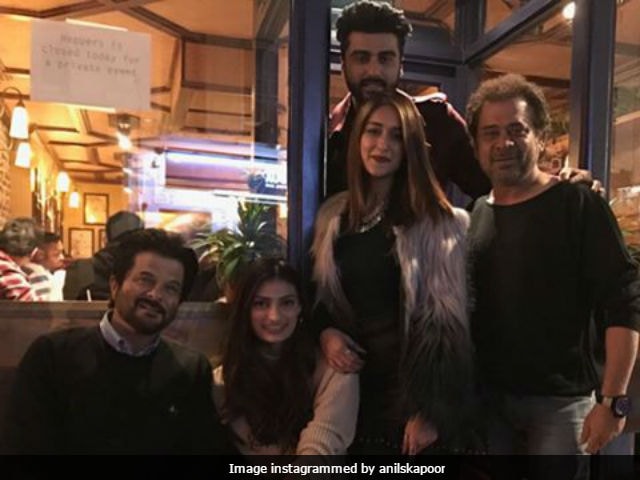 The cast of Mubarakan in London (Image courtesy: Anil Kapoor)

The shoot for Anees Bazmee's film Mubarakan is nearing its completion and the entire team is in a celebratory mood. Recently, Anil Kapoor posted a video on social media giving fans a glimpse of the craziness and fun behind the cameras. In the short clip, the entire cast and crew of Mubarakan can be seen grooving to the music and cutting cakes. Anil Kapoor captioned the video as: "This is how we do it"!! The madness and the craziness begins! Celebrations & happy faces all around! #Mubarakan #28thjuly @aneesbazmee @athiyashetty @arjunkapoor @ileana_official(sic)." Mubarakan is scheduled to release in theatres on July 28.
Check out the video posted by Anil Kapoor here:


" This is how we do it"!! The madness and the craziness begins! Celebrations & happy faces all around! #Mubarakan #28thjuly @aneesbazmee @athiyashetty @arjunkapoor @ileana_official

On Wednesday, Ileana D'Cruz shared a picture of the 60-year-old actor along with Arjun Kapoor and filmmaker Anees Bazmee announcing that the shoot for the film is about to be wrapped soon.

Mubarakan features Anil Kapoor, Arjun Kapoor, Ileana D'Cruz and Athiya Shetty in lead roles. Anil Kapoor will be seen sharing the screen space with his nephew, Arjun for the first time.
Anil Kapoor and director Anees Bazmee will be collaborating for the fifth time with this film. The duo have previously worked together in films like - Welcome, Welcome Back, No Entry and No Problem.
Anil Kapoor was last seen in 2015 movie Welcome Back. The film also featured Nana Patekar, John Abraham, Shruti Haasan, Paresh Rawal, Dimple Kapadia and Naseeruddin Shah in lead roles.
After Mubarakan, Ileana D'Cruz will next be seen in Milan Luthria's Baadshaho.
Meanwhile, Arjun Kapoor is currently awaiting the release of Half Girlfriend opposite Shraddha Kapoor.