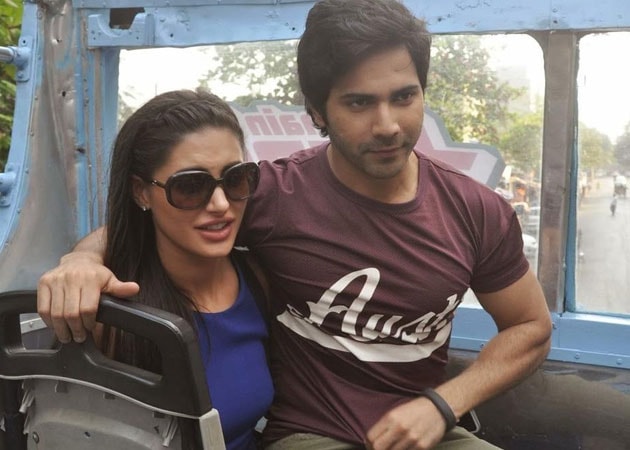 Nargis says she is romantically linked with herself and not anyone else. (Image courtesy: Varinder Chawla)

Actress Nargis Fakhri has denied reports of dating her Main Tera Hero co-star Varun Dhawan, saying she is romantically linked with herself and not anyone else.

Actress Nargis Fakhri has denied reports of dating her Main Tera Hero co-star Varun Dhawan, saying she is romantically linked with herself and not anyone else.
"What? No way dude. Oh, really it's been written? I haven't read that. I don't have any idea about that. People just write stuff, right. That's hilarious," Nargis told PTI.
Indirectly blaming the media, the 34-year-old model-turned-actress said such stuff is written out of the blue, without any truth in it.
"There was a rumour that I was dancing with another actor all night long in a party when I hadn't even seen that person. No offence, but people just write stuff," she said.
Asked what is her idea of a good date, she said Indian boys should not be fanciful but creative while dating girls.
"Indian boys should learn to date properly. You needn't have to be fancy but creative. Ask the girl for a date. Do something nice. Don't expect anything - that is the main thing. Never expect anything. Have a nice time. Have a conversation," she said.
Nargis said she bided by the same rules,"I had one good date in New York. The person picked me up on my doorstep. Took me to hotels and nightclub and dropped me at my home. Can you imagine? That was the most memorable date I ever had and to me I keep that standard. You can't go any lower than that," she said.
Asked about her journey in Bollywood so far, Nargis said it was tumultuous but she was very happy as sacrifices such as these made a person's worth.
"It has been a very tumultuous journey with its ups, with its downs. However, the sacrifices always find a way to become worth it, and in life it is good - I am happy," she said.
"India has taught me many things - knowing yourself, learning to live alone without anybody's help, learnt to value Indian values and taught me to connect with my heart, my soul and my spirit."
Asked if she planned to move back to USA after she finished shooting for her first Hollywood movie Spy, Nargis said she had taken a long time to make adjustments and wouldn't want to give it away, especially when she was adjusting better.
"I plan to focus more on Bollywood because it has taken me so long to adjust. I wouldn't want to give it away and I love it here now and I feel that I am getting better. So I would stay here and make this as my priority," she said.
Replying to a query, Nargis said she loved Alia Bhat and Ranbir Kapoor among current actors, though everyone else was also amazing.
"I love Alia. She is amazing. Actor - Ranbir. Everyone is awesome in their own right. So I don't like to compare because I am a Libran - I am diplomatic," she said.