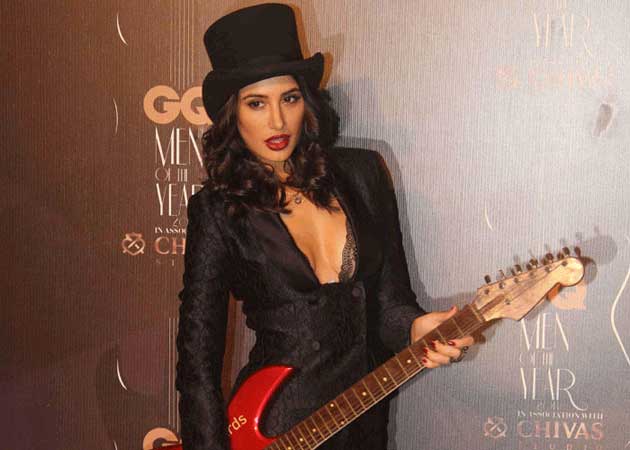 Nargis Fakhri in a top hat and suit at the GQ Men of The Year Awards 2014.

Hrithik's Twitter buddy has taken the challenge and improved it

Actress Nargis Fakhri has added herself to the growing list of Bollywood winners who have taken Hrithik Roshan's Bang Bang challenge and beaten it.

The steps are clear. Hrithik randomly dares you to do something on Twitter, calling it a Bang Bang challenge. To be a winner you have to respond to the dare in your own way. (Also Read: Shah Rukh's Ripping Reply)

Shah Rukh Khan, Ranveer Singh, Priyanka Chopra and Farhan Akhtar are among the stars who have won the challenge by displaying feats of strength, endurance and downright playfulness with aplomb. (Also Read:  Farhan's Dare For his Mental Boy)

Now, Hrithik's Twitter buddy Nargis Fakhri has taken the challenge and improved it.

To d 1who actually stimulated my #bangbangdare idea, @NargisFakhri girl frm d hood, shoot a RAP in a style only u can! V want crazzy!Accept?

And the actress responded to the challenge right away. She tweeted this reply to Hrithik the very same night:

In the video, she does a freestyle rap and tell her own story in words. She talks about her past, her life as a youngster in New York and also takes a jibe at her detractors. She says that one shouldn't judge her on her looks and talks about how she feels she is as a person.

To add to it, it seems that she did it all before her appearance at GQ Men of The Year Awards 2014 dressed in a top hat and suit.

Hrithik responded to her rap song in the morning:

She's all about love and she's ready to give! @NargisFakhri you are a creation d world needs to discover!!U are all things amazing. WINNER!